Design studio Hakuten has created a three-dimensional map of Ginza, Tokyo, that presents the ecology that exists in the district.

The Ginza Ecological Map, which was featured in the Japanese makeup brand Shiseido's Hakuten's window, was designed to "carefully express the impression of the location and the history of the city, with a hidden story of Ginza".

It spotlighted the natural elements found throughout the district, including samples of trees, plants, insects and earth, with the intention of enhancing the local community's knowledge of its district's ecology. Each item was presented in one of 72 windows – similarly to how scientific specimens are exhibited in museums.

The exhibition ran throughout 2021 and across two themes: Organisms, which presented insects and cuttings from plants, and Earth – showcasing the diversity of soils found throughout the district.

"We care­fully displayed this ecology in the window as if they were scientific specimens," said Hakuten.

"The exhibition ran throughout the year across two different ecological themes – Organisms and Earth – and brought to light a new and beautiful Ginza that had not been seen before in the form of the Ginza Ecology Map."

The materials were collected during a number of fieldwork studies in addition to the knowledge gained from speaking to people local to Ginza. Once collected, the items were exhibited in creative ways with the aim of becoming a tool to communicate the connection between Ginza's natural world and society.

For example, the plant named glothistle was collected from under the city's Wako clock tower, and as part of the exhibition was displayed in a clock-like motif to represent it. 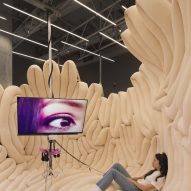 In addition, the district's ginkgo biloba trees were planted in 1906, and according to the designers, they represent a "turning point for modernisation in the city".

As a nod to the tree's heritage in the district, images of Ginza's buildings were printed onto the collected ginkgo tree leaves as part of the exhibition.

"Unlike most window displays that show objects and installations that only suit its occasion, not only did Ginza Ecological Map provide a new perspective of Ginza city, but through research from local residents it also expanded into a communication tool between the city and the people," said Hakuten.

"By looking at the usually unseen ecology that exists in a metropolis, we were able to rethink the relationship between the city, people, and nature in an attempt to approach a more sustainable society."

As part of the Earth theme, the colour of the soil across the district was documented, including samples collected from sidewalk ditches and from around various plants such as dogwood and camellia.

The exhibition also shed light on creating a number of creative resources from the city's soil – including pottery and crayons – and clothing dyed using local plant's pigments.

According to the studio, the pandemic provided the opportunity to reflect on the human-nature relationship as Ginza was "emptied" because of the pandemic.

The project was conceived of this change, and aimed to rethink the district's approach towards creating a society more mindful of enhancing and protecting its nature.

"In Covid-19 where we were provided with more opportunities to deeply reflect upon the global environment, this project allowed us to rethink the relationship between the city, people, and nature in an attempt to approach a more sustainable society," said Hakuten.

Ginza Ecological Map has been shortlisted in the exhibition design category at this year's Dezeen Awards alongside, Weird Sensation Feels Good – The World of ASMR, Greenwood Rising: Black Wall Street History Center exhibition and Journey of the Pioneers.