Designers might have had a hand in causing climate change but they are also key to solving it, according to the chair of the UK Climate Change Committee, who addressed the Design Council's sustainability conference as it kicked off alongside COP27.

"In the past, we have created great wealth through remarkable design, from Newcomen's steam engine to the very latest in nuclear technology," John Gummer, also known as Lord Deben, said at the Design for Planet Festival.

"The trouble is we didn't recognise that what we were designing actually had within it the ability to destroy."

Gummer, a Conservative former environment secretary and top climate adviser to the UK government, said this means that designers now have both the responsibility and the unique ability to reimagine products in a way that doesn't harm the planet and its people.

"Sustainable development demands good design," he said. "We won't win the battle against climate change unless we design the solutions."

Products can be beautiful and sustainable

Gummer made the comments in a virtual address during the Design Council's Design for Planet festival, which is taking place this week to coincide with the UN's COP27 climate conference in Egypt.

The two-day event in Newcastle aims to encourage and support designers in taking an active role in solving the climate crisis. 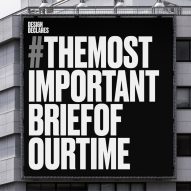 This should involve making sustainable low-carbon designs that are still beautiful and easy to use, Gummer argued.

"I don't think being attractive is something to be ashamed of because what it means is that we create things, which people want to use and want to use properly," he said.

"One of the fundamentals of beauty is now going to be that they enhance, extend and enable our lives rather than being at the heart of our destruction."

Designers "fed up" with industry's lack of action

Gummer is the chairman of the UK's independent Climate Change Committee, which is responsible for advising the government on emissions targets and monitoring its progress in achieving them.

Last week, Gummer warned that the UK's attempts to tackle emissions have so far been "appalling", leaving the country "off track" for meeting its climate targets.

This has been echoed by experts including Cambridge University engineering professor Julian Allwood, who argued that the UK's net-zero strategy is as unrealistic as "magic beans fertilised by unicorn's blood".

The UK's design industry had a similarly slow start, launching its Design Declares campaign a full two years after architects, engineers and other creative industries declared a climate emergency.

Announced in September as part of London Design Festival, the initiative hopes to unite studios that are "fed up with a lack of industry momentum".

The Design for Planet Festival is taking place from 9 to 10 November at the V&A Dundee. See Dezeen Events Guide for information about the many other exhibitions, installations and talks taking place throughout the week.