Shortlisted in the architectural lighting design category at this year's Dezeen Awards, the LED installation was installed across nine bridges on a 3.2-mile stretch of the River Thames in central London.

Commissioned by the Illuminated River Foundation, the installation utilises custom software that accesses each LED pixel independently to create a series of never-repeated patterns on the underside of the bridges' spans and sides.

The lighting was installed on rail, road and pedestrian bridges including the Foster + Partners-designed Millennium Bridge, Giles Gilbert Scott-designed Waterloo Bridge and the Golden Jubilee Footbridge, which was also designed by Lifschutz Davidson Sandilands.

The sequenced patterns of the lighting installation were designed to reference the activity on and along the banks of the river, while the colours were chosen as a nod to the shades of Impressionist and English Romanticist painters, "combining art and architecture".

"The artwork draws on the natural and social activity of the embankments, the kinetic energy of the water – barges, boats, cars, pedestrians, trains, and rising and falling tides," said the charity Illuminated River Foundation. 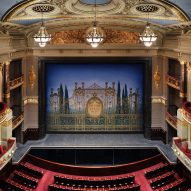 The photography is by James Newton unless stated.