Set in the Kiyosumi Shirakawa area of Tokyo, the coffee shop occupies a warehouse which Fourteen Stones Design renovated and extended "to preserve the appearance of the old warehouse as much as possible".

The studio removed the shutters from the front of the warehouse, adding a glass facade. The rest of the building, including the interiors, remains as it was – with minimal repairs made to the walls.

It aimed "to make everyday coffee an extraordinary experience" with a full "course of coffee" served by baristas and the renovation has been designed to facilitate this.

A staggered rectangular frame of white oak at the entrance of the cafe, which echoes the coffee package design, dominates the interior space and provides a central visual motif for the scheme.

This frame divides the entrance space from the main cafe where a U-shaped bar surrounding the barista workstations was placed. 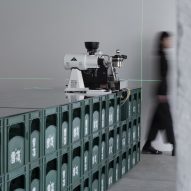 The barista's workbenches, which were made from black granite, were deliberately placed at the centre of the space to create "a stage set-up, which enables baristas to fully demonstrate their skills".

Besides the new seating area, restrooms, a kitchen, a laboratory and office space have all been renovated.

The service and bar countertops were made from "Jura Yellow" limestone. Featuring fossils from the Jura period, it was chosen for its texture and also for allusions to the passage of time – not only echoed in the coffee growing, roasting and brewing processes but also the journey of the brand from its inception 10 years ago.

Fourteen Stones Design's Yosuke Hayashi designed the custom furniture for the cafe in the same white oak as the frame structure. It was manufactured by Japanese company E&Y for the project.

The cafe's owner Kunitomo believes baristas "act as a bridge between the customer and the roastery" and should be given "a social status comparable to that of a sommelier".

Baristas at Koffee Mameya Kakeru will serve single cups of coffee through to full courses of coffee, "elevated by the newly designed space to the realm of gastronomy", according to the practice.

Fourteen Stones Design has been shortlisted in the restaurant and bar interior category of this year's Dezeen Awards. Other projects in the running include a rattan restaurant in Bangkok by Enter Projects Asia Co. and YODEZEEN's Japanese restaurant in Kyiv's city centre.

The photography is by Ooki Jingu.