New York-based studios Ennead Architects and Rockwell Group have converted a 19th-century train warehouse into the headquarters for a charitable organisation in Brooklyn's Sunset Park neighbourhood.

The studios transformed a block-long train repair shop in Brooklyn into a headquarters and distribution centre for the charitable organisation City Harvest, turning it into a bright and open space by modernising the original structure.

Ennead Architects led the external and internal redesign while Rockwell Group designed an event space and a test kitchen for the facility, which is called the Cohen Community Food Rescue Center.

The historic elements of the facade were kept largely intact by the redesign, with most of the interventions occurring in the long warehouse-like spaces of the interior.

"As we see it, the most sustainable building is the one that is already there, so our design approach was informed by the existing potential already within this building, which we revitalized and filled with daylight to create an open and welcoming environment for all," said Ennead Architects partner Richard Olcott.

Inside, Ennead opened up the 150,000 square-foot (13,935 metres) structure and uncovered features such as clerestory windows that had been closed over.

The two-storey structure now houses open-concept workspaces alongside spaces for the collection and distribution of food, with offices on the top floor and distribution areas on the bottom floor.

Throughout, Ennead Architects added steel screens and other partitions, and the studio also restored some of the tree-like wooden support columns throughout the space.

In the entryway, a steel staircase was installed to provide access to the upper level, where the office program has workspaces, lounges and a large gathering space, with custom graphics on some of the walls.

A number of energy-saving upgrades were also added to the structure. These included hookups, radiant heating and cooling, and electric charging stations.

Rockwell Group was responsible for designing a modern test kitchen where the organisation can host chefs and gatherings.

The kitchen was designed for visitors to be able to watch the food being prepared, and the warm space consists of reclaimed wood from barns, terracotta and steel elements.

This area leads to restored archways that open into an event space with reclaimed-oak flooring and what the studio called "immersive wainscoting".

Rockwell Group also installed a roof terrace to complete the program. Here, an outdoor kitchen and lounge area were furnished with items made from recycled milk jugs. 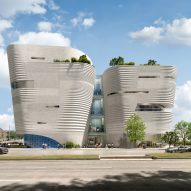 International architecture studio Ware Malcomb served as the architect of record on the project and provided designs for the logistic spaces in the build, including the loading docks and food-storage systems.

City Harvest is known for rescuing food waste and redistributing it to New Yorkers in need, and in a year distributes upwards of 75 million pounds of food.

"As the need for emergency food continues to stay far above pre-pandemic levels, our new, sustainable headquarters will help us meet the need in our city – one day, one meal, one New Yorker at a time," said City Harvest CEO Jilly Stephens.

Other projects that use older structures include the transformation of a Victorian warehouse into an office structure in London by Squire and Partners and the conversion of a 16th-century clergy house in Spain into a holiday home by Atienza Maure Arquitectos.

Photography by Albert Vecerka/Esto for Ennead Architects and Jason Varney for Rockwell Group.