New York studio Ennead Architects has unveiled its design for the Milwaukee Public Museum building in Wisconsin, which will consist of a series of rounded structures informed by the area's geological formations.

The new Milwaukee Public Museum will be located in the city's Haymarket neighbourhood, north along the Milwaukee river from the current museum building, which houses the city's natural history collections.

Ennead Architects collaborated with architect-of-record Kahler Slater for the design, which is based on the glacial activity that influenced the geology of the region and the nearby Mill Bluff State Park.

"The design of the new museum will be reminiscent of the geological formations contained within Mill Bluff State Park, emblematic of the region's diversity of landscapes formed by the movements of water through time," said Ennead Architects.

Designs for the structure show a series of rounded envelopes with grooved edges in the concrete and glass facade that signify the geological layering of the "ancient sea stacks present in Mill Buff State Park," according to the studio.

The rounded corners of the facade were designed to reference the erosion and weathering of the glacial landscapes that shaped much of Wisconsin.

At the base of the structure, the concrete will be cut away to allow for large glass windows to open up the interior of the museum to the public and let in light. Strip windows will continue up the facade at asymmetrical intervals, creating variation in the layered concrete.

The museum's primary forms will be spaced enough to allow for causeways. Three primary entrances will allow access to the building from the street.

"The convergence of Milwaukee's three rivers – the Milwaukee, Kinnickinnic, and Menomonee – inspire the museum's interior commons, whose three distinct entrances welcome visitors into a dynamic gathering space," said the studio.

The five-storey museum will have 200,000 square feet (18,580 square metres) of commons and exhibition space spread out over the structures.

On the upper levels, glass walkways will connect the structures, allowing for additional light to accompany the flow between the different programs.

The centre of the building will be carved out to create a five-storey atrium. This will serve as a public space that welcomes visitors to the museum and for the public to convene before entering the exhibits.

"The fluid layout of the building will enable visitors to preview different exhibit floors and enjoy a behind-the-scenes look at collection spaces, objects, and specimens that have typically been concealed behind closed doors," said Ennead Architects. 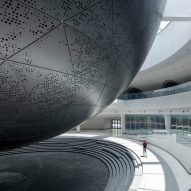 The exhibition design will be undertaken by New York-based design studio Thinc and will include permanent galleries as well as space for changing "multi-sensory" installations.

Two gardens will be present on the property, one at ground level and one on the rooftop. The architecture studios will collaborate with landscape designers GGN to make sure that the flora incorporates species native to the region.

On top of the exhibits, the museum will also house a planetarium, as well as educational and research spaces.

Ennead Architects has worked on a number of other structures that are dedicated to the sciences, including the world's largest building dedicated to astronomy in Shanghai and renovations to IM Pei's Eskenazi Museum in Indiana.