Architecture studio Week has envisioned a 4.4-kilometre-high memorial to draw attention to the number of reported deaths connected to the construction of the 2022 FIFA World Cup in Qatar.

Named the Qatar World Cup Memorial, the tower would be constructed from stacked concrete blocks, with each block representing one of the migrant workers reported to have died in Qatar since the country won the right to host the World Cup in 2010.

France- and Chile-based studio Week designed the octagonal structure to draw attention to the well-documented human rights abuses that have occurred in Qatar ahead of the tournament.

First envisioned in 2014, the conceptual tower was designed to grow as more deaths were reported.

"We chose the skyscraper typology because the impressive and imposing nature of the extreme height that the project could reach allows it to reflect the scale of the humanitarian disaster and the constantly increasing number of victims," the studio told Dezeen.

"Moreover, as it is a perpetually growing tower, there is no theoretical height limit, another typology of project would not have allowed this."

The memorial tower would be built from 2.5-meter-high modular concrete blocks with four placed on each layer to form an octagonal tower.

"We chose concrete because it is a mouldable material which makes it possible to produce the modules in large quantities," said the studio. "On the other hand, the project is a memorial, concrete is an austere material, its identity is adapted to the subject treated here." 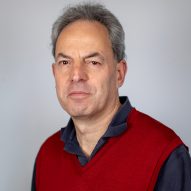 Week based the final height of the tower on the number of migrant worker deaths reported by the Guardian in 2021. The paper calculated that at least 6,500 migrant workers from India, Pakistan, Nepal, Bangladesh and Sri Lanka had died in the Qatar between 2010 and 2020.

However, according to football's governing body FIFA, there have been 37 deaths connected to the construction of the World Cup stadiums.

Using the Guardian's figures, the final height of Week's memorial would be 4.4 kilometres.

"It's scandalous," said Week. "We are surprised that the media does not mention this number of 6,751 dead."

"What's incredible is that we had originally imagined a 1.5-kilometre tower, which already seemed exaggerated to us because our objective was to denounce," it continued. "But the reality is beyond us."

Qatar has been widely criticised for its human rights record and conditions experienced by migrant workers ahead of this year's World Cup, which began earlier this week. The tournament is being hosted in eight stadiums built or refurbished for the event designed by architecture studios Foster + Partners, Fenwick-Iribarren Architects, Zaha Hadid Architects, Aecom, Dar Al-Handasah, Ibrahim M Jaidah, Ramboll and Pattern Design.

These stadiums have been largely built by migrant workers, whose conditions have been the focus of much of the criticism. In 2016 Amnesty International accused Qatar of using forced labour on World Cup sites and the organisation recently reported that abuses were still happening "on a significant scale" in Qatar.

Speaking to Dezeen, Amnesty International's Peter Frankental said that the architects of the stadiums should speak out on human rights issues or risk being part of a sportswashing attempt.

Week agreed with this sentiment.

"We believe that the responsibility of the architect vis-à-vis the working conditions of the people who build his project is important," said the studio.

"Construction is a fundamental part of the architectural project process and it is the responsibility of architects to ensure the well-being of all the actors necessary to carry out the development of a project. But we do not know the context or the real role of architects in such a country during the construction phase."