The secretary-general of Qatar's Supreme Committee for Delivery and Legacy has said that at least 400 migrant workers died building the World Cup.

In an interview with presenter Piers Morgan, World Cup Supreme Committee for Delivery and Legacy secretary-general Hassan al-Thawadi was asked what "realistic total do you think of migrant workers who died as a result of work they're doing for the World Cup?"

The World Cup has been overshadowed by reports of human rights abuses connected to the large numbers of migrant workers who constructed the eight World Cup stadiums and associated infrastructure. In 2021, the Guardian reported that 6,500 migrant workers had died in the county since 2010.

"One is death is a death too many"

However, football's governing body FIFA stated that there have been 37 deaths connected to the construction of the World Cup stadiums.

Al-Thawadi's comments are the first from a senior Qatar official that seem to contradict the official figures. However, the Supreme Committee for Delivery and Legacy later released a statement stating that Al-Thawadi was referring to "national statistics covering the period of 2014-2020 for all work-related fatalities (414) nationwide in Qatar, covering all sectors and nationalities". Later in the interview, Al-Thawadi made the case that safety standards had improved at the World Cup sites since construction began.

"One death is a death too many, plain and simple," he said. "Every year the health and safety standards on the sites are improving, at least the World Cup sites – the sites we are responsible for."

A recent report published by human rights organisation Amnesty International said that worker conditions have improved in the country since Qatar was awarded the World Cup. However, it stated many workers are still "subjected to conditions that amount to forced labour".

"Although Qatar has made important strides on labour rights over the past five years, it's abundantly clear that there is a great distance still to go," said Steve Cockburn, head of economic and social justice at Amnesty International.

"Thousands of workers remain stuck in the familiar cycle of exploitation and abuse thanks to legal loopholes and inadequate enforcement."

"The improvements that have happened aren't because of the World Cup"

Qatar has made several notable labour reforms since 2017, including introducing a minimum wage, labour tribunals and a support fund to pay unpaid wages. However, the country has yet to introduce a fund to compensate the workers who have died or suffered abuse building the tournament venues and infrastructure, which Amnesty International is calling for.

According to Al-Thawadi, the improvements made to migrant workers' conditions were not directly related to the World Cup.

"The World Cup served as a vehicle, as an accelerator, as a catalyst because of the spotlight which we recognized early," he continued. 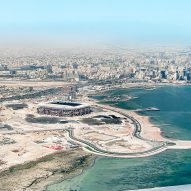 Along with the human rights issues, the Qatar World has also come under scrutiny for its sustainability claims, with organisers stating that Qatar 2022 will be the first carbon-neutral tournament in World Cup history. Experts told Dezeen this claim was "built on sand".

"It's somewhat disingenuous, not just of the Qataris but of FIFA as well," sport and geopolitics expert Simon Chadwick said of the carbon-neutral claim.

"It's window dressing; it's built on sand," he told Dezeen.

The main image shows Lusail Stadium by Foster + Partners. The photo is by Nigel Young.