American designer Suzie McMurtry has developed a mushroom-spore dispenser that is automatically triggered during a wildfire so the fungi can detoxify the soil after a blaze.

The Living with Wildfire system consists of a flame-retardent mycelium pod, protecting a steel vessel filled with water and sealed with a cork containing billions of dormant oyster mushroom spores.

In the event of a wildfire, this water would evaporate and build pressure in the vessel, eventually launching the cork into the air and floating the spores far and wide in the hope that they can take root in areas where the fire has subsided.

The fully functional prototype has not yet been tested and was designed first and foremost to spark discussions around living with the effects of climate change as wildfires are already becoming increasingly frequent and intense.

"I'm from California," McMurtry explained. "I moved to the UK just after the summer of 2020 following one of the deadliest and most widespread wildfire seasons. And over the last year, I've seen the rising heat in England."

"So I wanted to create something that could be a symbol of regeneration, but also an acknowledgement that the climate risk of wildfire is increasing even here," she continued.

The UK experienced record-high temperatures and droughts this year, alongside a 200 per cent increase in wildfires compared to 2021. Over the next 60 years, the number of "very high" danger days when fires are likely to develop is expected to more than quadruple.

As these blazes encroach on semi-urban areas, this will likely entail not just the destruction of property but also the contamination of water and soil, due to the toxic ash that is left behind when man-made products and building materials such as electronics, paints and plastic pipes are set on fire.

Living with Wildfire, which is McMurtry's graduate project from the MA Material Futures at Central Saint Martins, was designed to act as a "small-scale, decentralised wildfire insurance plan" that can be set up around the perimeter of a property such as a home or a civic building.

The system makes use of mycoremediation – an experimental method that uses fungi, also known as nature's recyclers, to break down and remove pollutants from a contaminated environment.

McMurtry's prototype contains oyster mushroom spores, which are often used for mycoremediation projects as the fungus is both robust and omnivorous.

Preliminary studies suggest that it could be used to decompose everything from pesticides and batteries to fossil fuel derivatives such as plastic and diesel oil, using special enzymes to break them down into non-toxic compounds such as carbon, oxygen and hydrogen that are then released back into the air or the soil.

The fungus can even absorb heavy metals like arsenic and lead, although it cannot break these down.

"They still show up in the fruit of the mushroom when it grows," McMurtry told Dezeen.

Mycelium is "part of the solution" to carbon-negative buildings

Combined with fungi's natural ability to stabilise soils and prevent erosion, the designer speculates that fungi could act as a nature-based solution for mitigating the damage caused by wildfires.

Her Living with Wildfire system is modelled on the fire-reactive seedpods of trees such as the lodgepole pine and Australian banksia, which have evolved to open only after being exposed to fire in order to protect the seeds from the worst of the blaze.

Based on this functionality, McMurtry designed a heat-activated "spore cannon" that is protected inside a pod made of mycelium – the vegetative part of a fungus, which is increasingly being used as an alternative to plastic insulation due to its natural fire retardant properties.

"The mycelium is actually grown on a silica-rich substrate, which has been shown in a couple of studies to make it more fire resistant," the designer explained.

The hope is that this would hold off the flames long enough for the pressure in the internal steel vessel to build and the mushroom spores to be catapulted into the air before they can be incinerated.

To hasten this process, users can also pile branches and brush underneath the mycoremediation pod, which they have accumulated from forest thinning measures designed to control wildfires.

Although research on mycoremediation is still in its infancy, the strategy has already been deployed by a number of community restoration projects across California since 2017.

Among them are non-profits such as the Fire Remediation Action Coalition and CoRenewal, who inoculated erosion prevention tubes made of compressed straw with oyster mushroom spores and placed them in burn zones across the state.

The Living with Wildfire system essentially hopes to automate this process, although McMurtry concedes that the choice of fungus and the pod's positioning would first have to be tailored to the local ecosystem, terrain and soil if it was to be adopted for the real world.

"The moisture content of the soil would indicate how well the spores would actually take hold," McMurtry said. "That's the speculative element of this."

Elevated high above the ground on its three spindly steel legs, the mycoremediation system was also designed to have a narrative function beyond just its practical use.

"It could sit there for a couple of summers, a couple of years, reminding people in the surrounding area that a wildfire is something that is a possibility," McMurtry said. 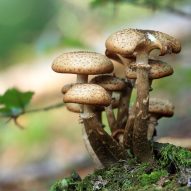 Mushrooms have the power to eat plastic say scientists

The mycelium pod is labelled with tags made of lead-free quick-melting pewter and emblazoned with the Latin name of the mushroom spores it holds.

In case of a fire, these would melt down into the frame's steel rim, effectively creating a kind of memento of the event.

"Living with Wildfire encourages reflection, adaptation and bioremediation while leaving room for the grief that comes with witnessing a changing bioregion," McMurtry explained.

The video is by Maël Hénaff.