Melbourne-based architects Adam Newman and Kelvin Tsang have created a scaled-down version of Greece's famous Parthenon temple, which is covered in colourful and perspective-bending murals.

Built at a third of the scale of the original temple, Temple of Boom has been installed in the garden of the National Gallery of Victoria (NGV) in Melbourne for its NGV Architecture Commission.

Newman and Tsang, both of architecture studio NWMN, wanted to look at how and why the Parthenon has become "an apex symbol of Western civilisation, democracy and perfection".

"One of the most famous examples of classical architecture, the Parthenon in Athens is often viewed as a potent symbol of Western art and culture," said Tony Ellwood, NGV director.

"This thought-provoking work by Adam Newman and Kelvin Tsang invites us to consider how we create and imbue architecture with meaning, as well as how this meaning can shift across time periods and cultures."

Made from glass-reinforced concrete, the temporary installation is built around a 1958 Henry Moore sculpture, Draped seated woman, which is a permanent fixture in the NGV garden. 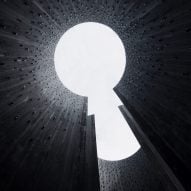 Other artists will be invited to decorate the structure over the course of its nine-month residency.

Temple of Boom will also host a programme of activities and performances, including a VR experience that will allow participants to virtually explore the real Parthenon in Athens.

Previous designs created for the NGV Architecture Commission include the mist-filled Doubleground created by Muir and Openwork in 2019 and Edition Office's In Absence pavilion in 2020.

It is the seventh installation created for the NGV Architecture Commission, an annual pavilion series that began in 2016, and will also be the venue for NGV Friday Nights, which will include sets from some of Melbourne's top DJs.

Temple of Boom is on show at NGV in Melbourne from 22 November 2022 until October 2023. For an up-to-date list of architecture and design events, visit Dezeen Events Guide.