A hot pink called Viva Magenta that is reminiscent of blush has been named as 2023 colour of the year by the American colour company Pantone.

Described by the brand as "an unconventional red for an unconventional time", Pantone's Viva Magenta 18-1750 is a vibrant pinky colour with hints of purple that belongs to the red colour family.

"It's assertive but it's not aggressive – we refer to it as a fist in a velvet glove," said vice president of the Pantone Color Institute Laurie Pressman.

"It's a brave and fearless red shade that vibrates with vim and vigour," Pressman told Dezeen. "Its exuberance promotes optimism and joy."

Pantone's trend-forecasting research department the Pantone Color Institute selects the colour each year. It said that this year's colour choice reflects the "rebellious" spirit of the time and the renewed interest in creative experimentation following the coronavirus pandemic.

"Audacious, witty and inclusive of all, Pantone 18-1750 Viva Magenta welcomes anyone and everyone with the same rebellious spirit," said the brand.

"Powerful and empowering, it is an animated red that encourages experimentation and self-expression without restraint; an electrifying, boundaryless shade that is manifestly 'out there' and is a stand-out statement."

According to Pantone Color Institute's research, magenta pinks are already popular among the fashion and beauty community. It expects the interior world to follow suit.

Earlier this year, Italian fashion house Valentino released a magenta pink coloured fall/winter collection and models have been wearing similar shades on their eyelids and lashes.

"It's a great colour for reflecting light, which gives it a sense of fantasy and glamour," trend forecaster and Pantone Color Institute member Jane Boddy said. "It's so flattering across all skin tones and all genders."

"Traditionally you would imagine this be a colour for the lips or the cheeks whereas now we're seeing it as a solid eye colour in a painterly stroke," Boddy added. 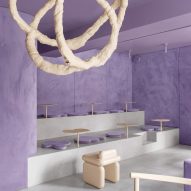 Although Viva Magenta is part of the red colour family, Pressman argued that the colour is not as expected or "aggressive" as traditional reds thanks to its pinky tinge. Red traditionally has connotations with rage and danger.

According to Boddy, despite the bright pink being relevant to today's society, the colour is still rooted in nature, where it can be found in tropical flowers and insects.

This is not the first time Pantone has chosen a pink as its colour of the year. For 2016, the colour company chose a markedly lighter pastel pink with rose tones called Rose Quartz alongside Serenity, a calming light blue hue.

Last year, it named Very Peri, a purple colour described by Pantone as "a periwinkle shade of blue" as its colour of the year.

The controversy caused by the brand calling it blue was criticised by interiors expert Michelle Ogundehin, who called time on Pantone's colour of the year exercise, writing in an article on Dezeen that "it's time to reconsider the whole colour of the year carnival".

The imagery is courtesy of Huge.