Architecture studio McCloy + Muchemwa has teamed up with design studio Mitre & Mondays to create tables that join together like puzzle pieces for a Sheffield festival.

The Partly Cloudy Tables were designed for Out & About, a programme of free events in Pinball Park, Sheffield, intended to support economic recovery in the northern English city.

Each table has its own unique shape. But they fit together in many different ways, offering endless possibilities for configuration.

"The Partly Cloudy Tables are designed as a family where the geometry of each tabletop is similar but not identical," said McCloy + Muchemwa co-founders Steve McCloy and Bongani Muchemwa.

"The tables link together so that they can be used individually, deployed in linear arrangements, or gathered into islands and organic clusters," they told Dezeen.

London-based McCloy + Muchemwa and Mitre & Mondays worked together to take the project from concept to reality, after being introduced by Out & About curators Kerry Campbell and David McLeavy.

Their goal was to produce shapes that can serve different functions, but also inspire creative thinking that might not be possible on traditional tables.

"One hypothesis was that rectangular tables dictate orthogonal arrangements and can cause a hierarchical situation during public workshops," said McCloy and Muchemwa.

"We wanted an unexpected, unusual design to provoke curiosity from the public, start a conversation, and loosen some preconceptions."

The tables were formed of an 18-millimetre-thick surface of CNC-cut plywood, fixed to a stainless steel base made using a computer-controlled pipe bender. Each tabletop is white and formed of circular geometries.

Referencing artworks by Georgia O'Keeffe and David Hockney, the design was intended to stand out against a backdrop that includes a colourful floor painting by local artist Florence Blanchard. 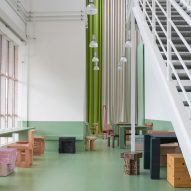 "We selected a neutral colour palette to complement the site of Pinball Park," said McCloy and Muchemwa.

"Because they are irregular shapes and white, guessing what they look like is a bit like the childhood game of cloud gazing," they suggested.

The tabletops and bases are fixed by simple elastic ties, so they can be disassembled for easy storage and transportation, and they have adjustable feet to allow for uneven ground surfaces.

"This dynamic modular system is an efficient and user-friendly way to create a coherent and visually expressive installation," added the architects.

McCloy and Muchemwa founded their studio in 2017 and have completed a range of small projects that include one of London Festival of Architecture's City Benches and a self-build greenhouse called The Orangery.

Over four weekends between July and September, the tables accommodated a wide variety of activities that ranged from painting workshops to pickle-making classes.

Now the event is over, the table have been donated to a local creative and community group so they can continue to be used for public events.

The photography is by Joe Horner.