The London-based studio McCloy + Muchemwa was tasked with transforming the dark, dusty and asbestos-riddled garage into a safe and attractive outbuilding in the clients' rear garden.

As a consequence of spending more time at home during the Covid-19 lockdowns, the clients wanted to restore the existing outbuilding into a usable space for hobbies and DIY.

The self-build project's small budget informed an approach that focused on simple adaptations, upgrading the existing structure and reusing materials wherever possible.

"The internal timber structure was largely sound, if a little haphazard, so to minimise the quantity of new materials added, a 'surgical' approach to refurbishment was chosen," explained McCloy + Muchemwa.

"Improvements to the building fabric promise to extend the working life of the structure and have been undertaken to minimise the waste taken off site."

A priority of the renovation was the removal of the damaged roof, which contained asbestos. Sections of timber affected by rot were also replaced.

The original blockwork walls were retained and sealed with exterior-grade paint to improve their longevity.

The converted garage, named The Orangery, now houses a storage area for large items such as bikes and lawnmowers, alongside a hobby zone with a workbench and further storage for power tools and gardening equipment.

Much of the furniture used inside is either upcycled or made from recycled building materials. Storage units are raised off the floor on wheels and can be reconfigured if required.

An extension to the existing structure contains an "orangery", or greenhouse, which is used for growing food. This timber-framed addition is clad with polycarbonate panels that allow light to reach the planters, shelves and potting table inside.

The woodwork inside the greenhouse and garage is painted a vibrant shade of orange to evoke the aesthetic of the high-tech architecture movement and, in particular, the work of the late architect Richard Rogers. 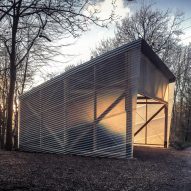 Elements such as the angular shelf brackets, simple hairpin table legs and castors are finished in the same industrial orange hue.

The garage is illuminated naturally by daylight entering through a triangular opening on the gable end connected to the greenhouse and a new pyramid-shaped window on one side.

Corrugated black metal cladding applied to the building's walls and roof was chosen to emphasise the colours in the garden – an approach that the architects said "references classical still-life paintings".

The simple colour palette of orange and black creates consistency throughout the design, along with a recurring triangular motif.

The same colour scheme and design language are applied to a pergola added to the rear wall of the clients' house.

This seven-metre-long structure provides a sheltered outdoor space and incorporates drainage for collecting rainwater used in the garden.

Elsewhere in England, architect Richard John Andrews also recently completed a multifunctional outbuilding for his garden in east London, and Invisible Studio created a translucent model-making shed for its self-built studio in Bath.

McCloy + Muchemwa was founded by Steve McCloy and Bongani Muchemwa in London in 2017. Its work ranges in scale from architecture to objects, such as the undulating yellow bench that it designed for the London Festival of Architecture in 2018.

The photography is by Simon Kennedy unless stated.