A gravestone dedicated to a deceased dachsund and an undulating strip of bright yellow rubber are two of nine imaginative public benches unveiled as part of this year's London Festival of Architecture.

Designed in response to an open call for benches to enliven the public realm, the nine benches are designed by architecture and design students, recent graduates, and emerging practices from across London.

The benches are installed across the City of London and London Bridge, which are both focus areas for this year's London Festival of Architecture, which Dezeen is media partner for.

Placed outside of London Bridge Station the bench is designed to challenge the public's perception of physical currency during uncertain economic times.

"Over the centuries, traders, manufacturers, workers and business people of all descriptions have used London Bridge as a gateway to the City," said Nadia Broccardo, executive director Team London Bridge.

"Under the gaze of the striking new London Bridge station, The Money Box bench marks a place where journeys are started and finished, and where hundreds of thousands of people travel to daily to earn a living."

A stone bench designed by architectural assistant Patrick McEvoy, in memory of a dog called Geoffrey Barkington, has been installed in Jubilee Gardens in Houndsditch.

Houndsditch marks the route of a Roman ditch outside part of the London Wall, which was known for the disposal of deceased dogs. Several dog skeletons were discovered here in 1989 during construction works.

The stone bench, which weighs one tonne and features a cut-out silhouette of a dachshund, was made by Solid Geometry, Tarmac, Kilnbridge, the University of Westminster and Prewett Bizley Architects.

Based upon the majestic natural rock formations of the Giant's Causeway in Northern Ireland, a bench by Studio Yu and Tomos Design is made from stacked hexagonal blocks of recycled plastic terrazzo that form both seats and planters.

Located in the City's Bloomberg Arcade, The modular blocks can be incorporated into different configurations to suit the needs of different spaces.

Called A Bench for Everyone, an undulating yellow rubber bench by young practice McCloy + Muchemwa is designed to evoke memories of the much-loved comforts of home furniture. The practice said its folded shape could be "reminiscent of your comfy sofa where you cuddled up with a beloved dog, or birthday parties in the dining room, or even the naughty step." 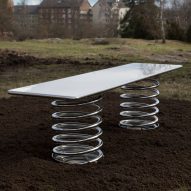 The design, which is installed inside One New Change, is made from studded rubber on a plywood frame that could be extended to create a longer bench.

Installed in Creechurch Place, the two benches are made up of a staggered series of green and red panels that reference the nearby London Stock Exchange and the undulating graphs of green and red bars used to track profit and loss.

In Fen Court, young practice Mills Turner installed Double bench, a seat made from a series of repeatable timber curves that are threaded onto steel bars and screwed tightly together at each end. The curved form is designed to fit to the curve of the body when sitting.

The dry-construction technique makes the bench easy to assemble and dismantle and allows it to be flat-packed with ease.

Constructed from standard clay bricks that have been crafted, glazed and stacked to create various heights, the colours and patterns of the bench are designed to reflect the history of the area as a longstanding place for trade, exchange and religious diversity.

Eight platforms of differing heights make up The Garden Bench by Eleanor Dodman Architects. Installed at 150 Cheapside, the platforms function as a mix of seating and planters for camomile, lavender and thyme.

The Garden Bench pays tribute to the City of London's long history of courtyard gardens , which include Postman's Park and the Cleary Garden.

Standing in front of the Royal Exchange, Mariya Lapteva, an architectural assistant at London-based studio Architecture Initiative has designed the City Ghosts bench.

The bench features cast panels depicting streetscapes and buildings from the surrounding area, including East India House and the shopfronts along Leadenhall Street, that have been demolished.

"The new installations demonstrate how small-scale interventions, in the hands of talented architects and designers, can make a big difference the city around us and will be enjoyed by hundreds of thousands of people," she added

In a similar project last year, ten designers including Max Lamb, Scholten & Baijings and Philippe Malouin each created a "Superbench" to help regenerate a park area just outside of Stockholm, Sweden. The participating designers were asked to reconsider the concept of the traditional park bench while retaining its sole function of providing an urban meeting place to sit or relax.