The studio renovated the apartment, which is located in a building designed by architecture studio Höög & Morssing in the early 1920s, to create an interior that "might pass for the original", it said.

The studio made significant changes to the floor plan for its renovation of the 350-square-metre Habitat 100 apartment.

"The biggest changes were made to the practical spaces and the reception rooms," Note Design Studio architect Jesper Mellgren told Dezeen. "The entrance was awfully tight in relation to the size of the residence, so we rearranged the floor plan in order to create a generous atrium with clear guidance in how to navigate the apartment."

Note used greyed wood to mark the private spaces in the flat and separate them from the atrium, lowered the ceiling and removed the floors to create better acoustics.

"To reach the anticipated level of acoustical improvement all floors had to be removed in order to strengthen the joists and put in 100 tons of marble gravel," Mellgren said.

"Then we casted a new floor in the whole apartment to glue the new wood and marble floors upon. For the ceilings, we needed to create new ones detached from the original slabs."

Located in central Stockholm, the house that the apartment is in was built during the Swedish Grace era, a romantic, refined style movement in the 1920s.

In terms of interior design, Swedish Grace was "very much about the architectural promenade — implementing new findings while exploring a floor plan," Mellgren explained.

Note Design Studio nodded to this idea in its renovation of Habitat 100, which also features multiple references to surrounding buildings.

"Walking through the apartment is very much a journey of discovery where every space has unique qualities influencing its design," Mellgren explained. 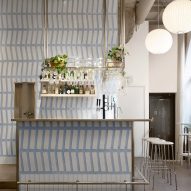 "We borrowed a lot from the immediate surroundings for obvious references to the style of the building and its context," he added.

"For instance; the radiator covers are balcony railings from the neighbouring building, the ceiling mouldings are similar to the eaves of the building, and the floor patterns are inspired by entrance door ornaments in the area."

The studio used a materials palette of marble and different types of wood to create a calm atmosphere in the flat and match the other materials used in the building.

Swedish Ekeberg and Brännlyckan marble was used in parts of the flats in a nod to the communal stairwell, which is clad in Italian marble.

Wood was also used throughout the flat. "As a contrast for social spaces and bedrooms we used oak to bring warmth and calmness," Mellgren said. The studio stained the oak to achieve the right colour.

Note Design Studio also aimed for the furniture chosen for Habitat 100 to add "another layer."

"We were fortunate to be trusted with designing a lot of custom-made furniture for the different spaces; nightstands, desks, mirrors, tables and washstands, which gave us more control in the creation of a vivid coherent expression," Mellgren said.

The studio used LED light strips, hidden beneath the ceiling mouldings, to create gradients of light and shadow on the walls.

The aim for Habitat 100, so called because it was designed almost exactly one hundred years after the building was completed, was for it to never be demolished.

"This project is very much about restoring the residence to something genuine and appropriate for its original architecture," Mellgren said.

"The main goal is for this interior detailing never to be demolished or replaced, still being personal to the client and exploratory for us in finding a contemporary interior that was conceivable 100 years ago."

Othe recent projects by Note Design Studio include a restaurant in a historic Stockholm food hall and a warm-hued wine bar that doubles as an office.

The studio has also designed a number of furniture and lighting pieces, including the streamlined Sprinkle pendant lamp for Zero Lighting.

The photography is courtesy of Note Design Studio.