Italian superyacht and architecture studio Luca Dini Design and Architecture has designed a luxury island resort in the Red Sea as part of the Neom project in Saudi Arabia.

Set to welcome its first guests in early 2024, the Sindalah island resort will be the first of 10 regions completed as part of the Neom mega-development in north-eastern Saudi Arabia.

Described by Saudi crown prince Mohammed bin Salman as the "future of luxury travel", the 840,000-square-metre island will be developed in a resort aimed at the yachting community.

Designed by Luca Dini Design and Architecture, which is primarily known for designing superyachts, the resort will be built around a 86-berth marina and yacht club.

"Sindalah will be NEOM's first luxury island and yacht club destination in the Red Sea, providing a scenic gateway to the Red Sea that will become the region’s most exciting and attractive tourism location," said Bin Salman.

"It will be a destination where travellers can experience the true beauty of Neom and Saudi Arabia, above and below the water, making Sindalah the future of luxury travel." 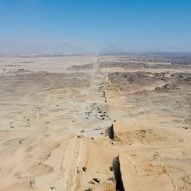 The rest of the island will be covered with several luxury hotels containing a total of over 400 rooms and over 300 serviced apartments and villas.

Two nine-hole golf courses, 38 restaurants and a beach club will also be built on the island.

The Sindalah luxury island resort is set to be one of 10 regions developed as part of the Neom masterplan, which will include The Line mega city. Unveiled earlier this year, The Line is being designed by US studio Morphosis as a 170-kilometre-long, mirror-clad skyscraper for nine million people.

The proposed city has been widely criticised with experts telling Dezeen that the project's sustainability and liveability claims were "naive".

Early this year, human rights organisation ALQST reported that three members of the Huwaitat tribe who are believed to have criticised displacements connected to Neom had been sentenced to death.

According to ALQST, they were sentenced by Saudi Arabia's Specialised Criminal Court after being "forcibly evicted and displaced to make way for the Neom megaproject".

Along with The Line and Sindalah, the Neom project will contain a ski resort designed by Zaha Hadid Architects, UNStudio, Aedas, LAVA and Bureau Proberts.