The Pollinator Kit is a direct-to-designer kit that allows producers to experiment with algae-based materials designed to replace traditional polyurethane resin – a fossil fuel-derived product found in many household items.

According to the company, the material has a biomaterial content of 56 per cent and can be used in the same moulds used in fossil-based products. The rest of the mixture is made from fossil-derived isocyanate.

The kit was formulated in order to respond to requests from designers for renewable materials.

"Historically, product designers, hobbyists, and artists have been limited by the materials available to them from commodity-based suppliers," said Checkerspot founder Charles Dimmler

"Manufacturers of raw materials can often overlook these small but powerful groups, opting instead to bring their materials to market via well-known consumer brands."

"This strategy pigeonholes renewables, limits the scope of how they can be used and consequently narrows the impact they can have."

Using biotechnology, Checkerspot has been able to create a production method that harvests the oil from algae to create "renewable building blocks" for use in product design.

Microalgal oil is obtained from large industrial facilities, many of which are located in southern Brazil, where after mass fermentation, algae is mixed with sugars and then water is subtracted to produce the oil.

"The upshot is a lower land footprint, a far lower water footprint, and a low carbon use relative to other ways of making oil."

The oils are converted into polyols, which Checkerspot then converts into polyurethane in a facility in Salt Lake City.

It can be used for making small and medium-sized products from jewellery and phone cases to surfboards and furniture and includes resin, a mixer as well as a choice of pigment, which is also made from algae.

Checkerspot said that the kits were designed both for designers already using polyurethanes at scale as well as novices who want to begin working with resins. 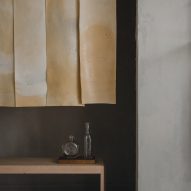 Rebeccah Pailes-Friedman, founder of Interwoven Design Group, told Dezeen that her studio has experimented with using the product for prototypes.

"By 3D printing a mold and then casting it in urethane we can see the part, test its durability and function and make any adjustments in the design before sending a part out for vacuum casting or injection molding," said Pailes-Friedman.

"This saves time and money."

Other designers working on testing the material and process include Waves Not Plastic, a non-profit organization in California.

"Access to the Pollinator Kit has provided our team at Waves Not Plastic with bio-based materials that have a beginning of life cycle consistent with our mission to reduce the world's reliance on petrochemicals," said founder Jeff Lenore.

After mixing the two components users must cast the material within 15 minutes and the tack time is approximately eight hours.

The kits come with around a kilogram of the product, but designers can order larger quantities if necessary.

Before the release of the kits, Checkerspot launched a brand called WNDR Alpine that creates skis from a similar algae-based process.

Other novel uses for algae include the limestone composites created from the material by researchers at the University of Colorado.