Manhattan design showcase ICFF + WantedDesign has announced that Odile Hainaut and Claire Pijoulat will lead the programming for the fair going forward.

Emerald, the parent company of ICFF + WantedDesign, announced that the change will go into effect for the May 2023 iteration of the festival.

Hainaut and Pijoulat, who founded the showcase WantedDesign in 2011, were tapped to lead the yearly fair, which takes place at the Javitts Center in Manhattan's Hudson Yards neighbourhood.

"Being able to implement a vision for both shows is a great opportunity," Hainaut told Dezeen.

"We plan on making it smoother and more efficient and have the two shows complement one another."

The pair have been working closely with ICFF since WantedDesign was acquired by the fair in 2019, and both showcases have been taking place in the same place.

"It's about the people and the space you create"

The decision came after Phil Robinson, the former director of the show, stepped down in 2022. Hainaut and Pijoulat were offered the position soon after and within 24 hours, they accepted.

"We would not have said yes if we didn't have the two years working at the Javitts." 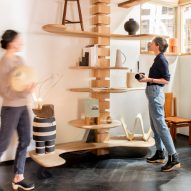 Pijoulat said that as a brand director, she hopes to apply some of the original vision that they had for WantedDesign in their programming for the combined fair in May.

She said that they hope to create a more welcoming atmosphere by implementing hospitality elements and reorganising the set-up of the fair to bridge "culture and commerce".

"It's not about the building it's about the people and the space you create," she told Dezeen.

"We're changing the vision from just being a trade show"

The lineup for WantedDesign for 2023 has largely been set and the team will be turning their attention to bringing back North American brands who have left the fair over the past few years.

"We're changing the vision from just being a trade show," said Hainaut, who noted that people have been reassured by their vision for the fair going forward.

"This is a design fair. It's the biggest design fair in North America," she added.

They plan on continuing the legacy of the fair as a "home base" for the industry in North America.

Emerald also announced that Kevin Gaffney has been promoted to vice president of the company's Design Group. He will work closely with Hainaut and Pijoulat in the operation of the fair.

Other top leadership changes made in the world of design fairs include the promotion of Maria Cristina Didero to global creative director for Design Miami as it launches its Paris edition.