Copenhagen-based Natural Material Studio has unveiled an understated pouch made from biomaterial for fashion brand Calvin Klein that was designed as a Christmas gift wrap.

The neutral-toned pouches are formed from handmade sheets of a biotextile developed by Natural Material Studio called Procel, which is created with a mix of protein bioplastic, a natural softener and natural pigments.

Each rectilinear pouch features a subtle, swirly pattern on its surface that is reminiscent of bubble residue and is held together by four steel pins – one in each of its corners.

A coal-hued ribbon, created from a slightly softer version of Procel, can be tied around the pouch as a decorative element.

Rather than a traditional roll of disposable wrapping paper, the studio created bespoke pouches in three different sizes to accommodate Calvin Klein's various products and form gift wraps that could be repurposed as a small purse-like bag after Christmas.

The pouches are also recyclable and biodegradable, according to Natural Material Studio.

"We wanted to design gift wrapping that could be reused, to challenge the whole single-use culture that especially accelerates during Christmas," studio founder Bonnie Hvillum told Dezeen.

"Our original inspiration was the Calvin Klein universe. We wanted to capture a contemporary, minimalistic and organic tone in our material colours and tactilities."

A counter clad in patches of Procel fastened with steel pins forms part of the installation at the Field's store, which takes cues from the overlapping appearance of the gift wrap.

This collage-style, layered and translucent look borrowed from the pouches' appearance intends to form a design principle for the project as a whole, explained Hvillum. 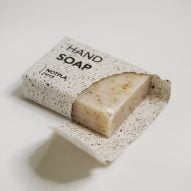 Visitors to the Calvin Klein store are invited to touch the counter and interact with Procel's texture, familiarising themselves with the biomaterial.

"At Natural Material Studio we believe that materials can be a facilitator for change by triggering renewed reflections through their tactility and aesthetics," concluded Hvillum.

"Hopefully the bespoke gift pouch can start new conversations around the Christmas table this year."

Spearheaded by Hvillum, Natural Material Studio has previously completed similar projects that explore the potential of biomaterials. These include conceptual ceramics made out of leftover seashells and algae, clay and foam-based textiles.

The photography is by Peter Vinther.