New York architecture studio ODA has released the masterplan for a community in Queens called Innovation QNS, which will have housing, retail and public space.

The plan includes a variety of housing, retail, offices, cultural centres and amenities all built around a 40,000-square-foot (3,716 square metres) public park.

It has been designed as a 15-minute city – an urban design concept formulated by scientist Carlos Moreno that proposes urban configurations where all amenities are located within a 15-minute walk or public transit trip from someone's home.

"It's all built together in five city blocks, serving not only the new community, but the entire neighborhood," ODA founder Eran Chen told Dezeen.

"Very few places I can think of in NYC or elsewhere have that."

The site, which stretches five blocks between 35th and 36th avenue near the Kaufman Arts District, is currently occupied by concrete-cover parking lots and industrial buildings.

The renderings of the project, which ODA noted are based upon preliminary iterations of the design and do not reflect the final approved design, show a variety of mid-rise apartment blocks planned for the site.

The borough of Queens has one of the smallest ratios of greenspace per capita in the city, so the implementation of the public park became central to the plan.

Each block will have public parks or plazas that allow people to enter the blocks in the middle and create flows through the development in general.

ODA said that the project was a response to changing labour patterns, which Chen said led them to reconsider the configuration of outdoor public space.

"There's no going back to how things were when street life was the only game in town for provisions and social interaction, nor is it possible to rebuild our great cities from scratch," he told Dezeen.

"Rather, it's about fostering our streets as the spine that supports the city culture and community we're all a part of."

Including the central park, as much as 92,000 square feet (8,547 square metres) of the development will be devoted to public space, including dog parks, playgrounds and playing fields. 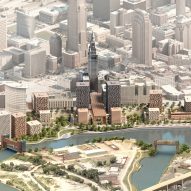 The housing will include market-rate housing as well as 45 per cent affordable housing, some of which will be geared towards seniors.

Renderings show solar panelling and green roofing on many of the structures planned for the development.

The city's approval of ODA's plan with developers Silverstein Properties, Kaufman Astoria Studios, and Bedrock Real Estate Partners marks the end of a long period of indecision in regard to the use of the land, where a series of plans to develop the area had failed for the last decade.

Construction on the project is set to begin in 2023, with the first buildings being completed in 2025.

ODA has been responsible for other large-scale development projects in New York City including the Rheingold Project housing block in Brooklyn.