NYC-based firm Garrison Architects has completed an animal shelter in Staten Island, which is wrapped in full-height translucent walls that provide even lighting conditions throughout the day.

The Staten Island Animal Rescue Center is located in Charleston, a neighbourhood in the New York City borough of Staten Island. It was completed earlier this year and inaugurated in a public ceremony on 26 October.

The project aims to break from the typical design of an animal care facility, and feel more like a home environment than a hospital.

For this reason, the animal's living areas are placed at the perimeter of the 5,000-square-foot (465 square metres) building.

The building is lined with translucent polycarbonate panels that provide an even, diffuse light.

"This allows our furry friends to get all the sunshine from the full-glass walls," said Garrison Architects.

"The animals we care for are a bridge to the natural world – breaking through our distraction and reminding us of our essential connections," the architect added.

The materials found throughout the building were chosen for their durability, ease of maintenance and affordability.

The centre of the building is occupied by service areas, as well as space to run the ventilation conduits of three separate mechanical systems.

"The enormous machines that serve this purpose are placed within an elevated courtyard in the center of the building," he added.

"That court is surrounded by a clerestory that allows sunlight to enter throughout the day regardless of orientation."

These conduits are finished in bright colours and feature prominently throughout the building's utilitarian and clean interiors.

Garrison described the building's mechanical and natural ventilation systems as "a machine for breathing". 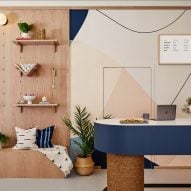 The building's lobby is named after a New York boy, Tommy Monahan, who died while trying to save his pets from a fire in 2007.

"The creation of the new Staten Island Animal Care Center, initially inspired by Tommy’s incredible heroism, now has the capacity to house more animals than ever," said NYC mayor Eric Adams at the building's inauguration.

The project was partially financed by New York City's Design Excellence Program, an initiative that sought to support high-quality design commissions for public buildings in NYC.Other buildings that this program helped finance include Studio Gang's Rescue 5 Fire Station and a utility building by nArchitects that sits in the NYC Department of Transportation’s Harper Street Yard, in Queens.

Other projects designed by the NYC-based Garrison Architects include Piaule, an Upstate New York retreat made up of 24 cabins that are available to lease, and a prototype for disaster-response homes that was completed after Hurricane Sandy in 2012.

The photography is by Eduard Hueber.