French practice Bruno Gaudin Architectes has completed a 15-year project to renovate and open up the historic rue de Richelieu site of the National Library of France in Paris, incorporating new public routes and spaces.

Completed in the late 19th century by architect Henri Labrouste, the library is considered a masterpiece of the Beaux Arts style, with vast, skylit reading rooms framed by slender steel columns and highly decorative arches.

Subject to piecemeal renovations in the 1950s, by the end of the 20th century the library had become largely obsolete, with its major collections moved to the library's François-Mitterand site, completed by Dominique Perrault in 1995.

"After 15 years of work, we have returned a building that has been profoundly transformed to meet the contemporary challenges of welcoming the public, opening it up to the city and sharing and exchanging with the younger generations," said Bruno Gaudin Architectes.

"Yesterday, closed in on itself, the large, magnificent, worn, fragmented, dark and dilapidated treasure chest has now been given a new identity, full of light," the practice said.

In order to keep the library open, work was split into two phases, with the first phase of the project completed in 2016 and focusing on reconfiguring the circulation in the front of the building along rue Richelieu.

Continuing this strategy, the recently completed second phase has created an entirely new entrance and landscaped courtyard along the rue Vivienne, transforming what were previously the rear facades of the building into a new, open frontage.

"The design of the new entrance, with its planted threshold open to the city, reflects the institution's desire to invite everyone to discover its world, both a researching library and a museum," explained the practice.

The library's two entrances create an east-west axis centred around the library's great hall, where the contemporary renewal is signalled by the replacing of the main staircase with a large aluminium-clad spiral stair.

To the northeast, the Oval Room contains the library's only freely accessible reading room, which has been updated with new shelving and mirrored light fittings informed by its curved shape that reflect the surrounding book stacks.

Due to its status as a heritage site, the richly decorated Labrouste Room to the west was subject to a more conventional restoration project completed by the chief architect of Historic Monuments, Jean-François Lagneau.

The adjacent central bookstack space in the southeastern corner of the site had been subject to many historical transformations, extended by Michel Roux-Spritz in the mid-20th century to add a new basement and upper spaces.

While this space was not protected as a historic monument, Bruno Gaudin Architectes chose to make a feature of its layered history, stripping it back to create a large reading room linked by steel staircases and walkways. 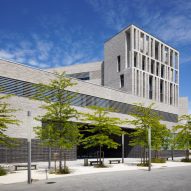 "The work on the bookstack storage areas provided an opportunity to underscore the reinterpretation and transformation of a major historic space on the site," said the practice.

"The desire to highlight the bookstack storage area's history coupled with the use of a contemporary architectural vocabulary…the project and its tools reveal the poetics of the place," it continued.

On the first floor, the east and west of the site have been connected by a new "gallery of glass", a glazed corridor with a glass floor offering views out across the roof and leading to a new museum space and the department of coins, medals and antiques.

"The glass gallery offers a view to the roof and the sky, with a surprising view of the domes of the Labrouste hall," said the practice.

"The translucent glass floors allow light to penetrate downward, accentuating the beautiful verticality of the staircase's rotunda," it continued.

Behind the scenes, the back-of-house areas include newly created and restored archival storage areas, as well as large, airy staff spaces in the library's attic.

Previous projects by Bruno Gaudin Architectes include a library building for Paris Nanterre university which is clad in thin, grey bricks and features an irregularly colonnaded "wind tower".

The photography is by Takuji Shimmura unless stated otherwise.