London studio Sybarite has created a department store for SKP in Chengdu, China, that is topped with a landscape created in collaboration with New York-based James Corner Field Operations.

Set alongside the New Century Global Centre, which is the world's largest building, the store contains 500,000 square metres of retail and hospitality spaces with 99 per cent of the buildings below ground level.

"I see SKP Park Chengdu like a symphony, a lengthy composition with several movements that have rhythm, a pulse and that crescendo every so often," said Sybarite co-founder Torquil McIntosh.

"Our ambition in designing this immense destination whose sum of parts come together [is] to evolve the dextrous SKP language and retail offer that we conceived some ten years ago on an exponential level."

The multi-level store is anchored by the SKP department store at the north and the future-focused SKP-S store at the south, which is topped by six water-spewing towers that reach up to 39 metres high.

Between these two anchor stores, a series of pavilions were arranged, divided by canyon-like walkways cut into the landscape that are crossed by angled bridges. These pavilions are occupied by key brands including Hermes, Louis Vuitton, Gucci and Prada.

At the centre of the park is a glazed Central Cube, which provides light and access to the shopping levels below ground and contains a square internal bamboo garden.

"The two department stores define each end of the site whilst the central area consists of luxury avenues where retail, gourmet and hospitality unfold in these beautifully choreographed walkways," McIntosh told Dezeen.

"Although varied, there is a consistency to the design language which is ever present in each SKP project but evolved here exponentially," he continued.

"It is essential to feel like one is in an SKP branded environment without a need for overbranding."

Covering all of the structures are a series of different parks described as a "botanical patchwork quilt" that were designed by New York landscape studio James Corner Field Operations. 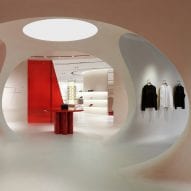 "The experience of shopping is taken to a new level with the visitors strolling through a beautifully crafted landscape filled with art, culture and nature," he added.

Throughout the development, Sybarite aimed to create a variety of different spaces for the shoppers and break free from a typical department store aesthetic.

"We need to capture the imagination of the visitor," said McIntosh. "Whether it be through the reflective oculus at SKP, the dramatic fluctuating light and water shows of the water beacons of SKP-S or the pause moments at the grand staircase, the plaza and the amphitheatre."

"There are the reflective pools along the avenues, the parallel universe anti-gravitational artworks and interior architecture of SKP-S," he continued. "There is a huge amount of variety which has the potential to develop as time does so that there is a constant cast of newness on offer."

The whole development sits above several subway lines that have station entrances integrated into the building and an underground car park for 2,400 cars.

London-based Sybarite has previously designed several spaces for SKP, including the SKP Beijing department store and a 20-storey SKP store in Xi'an. McIntosh believes that this is the most unique development for the brand.

"It is about capturing the culture and lifestyle in one place but more importantly about giving back to the citizens of Chengdu by creating a park to enjoy," he said. "The entire experience begins in this park."

"It is signalling a new dimension for retail master planning and hence our need to create a brand new kind of masterplan and for that reason it is unique to any other development that has gone before it in luxury retail terms," he continued.

Other retail interiors Sybarite has recently designed include a lifestyle concept store for Ferrari and the Miami shop of fashion label Joseph.

The photography is courtesy of Sybarite.