US studio Aidlin Darling Design has created a meeting facility for online travel company Expedia Group that features a wing-shaped green roof and walls made of stone and glass.

The Prow is located on Expedia Group's, 40-acre (16-hectare) corporate campus in Seattle's Interbay neighbourhood. The campus borders Elliot Bay, home to the Port of Seattle – one of America's busiest ports.

The Prow was conceived as a "biophilic retreat" for the company's staff members and executives – a place that would help connect people to the natural environment.

To design the building, Aidlin Darling Design, a studio based in San Francisco, drew upon the landscape and the architectural concepts of form and function.

"The focus was to design a retreat that is integrated with the surrounding environment and away from the day-to-day offices, allowing employees to clear their mind and thus spurring innovation," said the studio.

The design was informed by a master plan and site plan created by the San Francisco landscape firm Surface Design.

It features a series of "cascading plateaus" that descend from the campus office buildings down to the waterfront and a public park.

The plateaus are lined with long, canted rip-rap walls made of rock – an element that heavily influenced Aidlin Darling Design's of the retreat building.

"The Prow is discretely integrated into the landscape as an extension of these gestural landscape walls," said the studio.

The single-storey building has an angular floor plan and is tucked into the sloped site. Walls are made of wood, glass and stone.

"The retreat is hidden in plain sight, with a roof that mirrors the planted ground plane but is simply lifted at one end," the team said.

According to the architects, the building's low profile helped preserve views of Elliott Bay and Mount Rainier in the distance.

Its "vectoral shape" refers to motion, with the campus being surrounded by numerous modes of transportation, from boats of all types to cars, bikes, and scooters.

Moreover, airplanes are often spotted overhead as they approach and depart from Seattle's main airport.

"The Prow's wing form symbolizes Expedia Group's mission to aid people in the art of travel – much of which starts with flying," the team said. "The roof plane thus becomes an abstracted icon of global travel and adventure."

Inside, the building holds a meeting room and various support spaces. Outside one finds a terrace covered by the roof, which cantilevers 50 feet (15 metres) over the patio.

The building's northern entrance, which faces the office buildings, is marked with two black portals set within a stone wall, "representing the threshold between the everyday and the aspirational".

Once inside, one is afforded inspiring views of the water through glazed walls on the south and west. The other walls are solid. 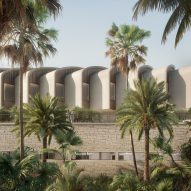 The meeting room is divided into three distinct areas. One features a large table by George Nakashima Woodworkers that seats up to 20 people. The other areas have casual seating, with one centred around a fireplace.

The team prioritised the use of natural materials, including rough-sawn cedar and Douglas fir, to emphasize a connection to nature and the Pacific Northwest.

"The overarching goal was to create a soulful sanctuary that both calms the mind and body, and acts as a catalyst for inspirational thought," the team said.

Other projects by Aidlin Darling Design include a remote home in California's Palm Desert that sits among boulders and pinyon trees, and a family dwelling in Silicon Valley that consists of interlocking volumes clad in zinc, cedar and stucco.

The photography is by Adam Rouse.