A large solar farm forms the centrepiece of Rome's bid to host the World Expo in 2030, masterplanned by Carlo Ratti Associati with architect Italo Rota and urbanist Richard Burdett.

If selected for the event, the mosaic-like structure would become "the world's largest urban solar farm" and power the exhibition site in Rome with renewable energy.

According to Carlo Ratti Associati (CRA), Rota and Burdett, the idea is that all nations contributing to the World Expo 2030 would help to run the system.

This is intended to invite discourse on the concept of sharing energy while establishing "a new model for urban development".

"Our master plan experiments with collective city-making processes, new energy-sharing strategies, and inclusive urban transformations that go well beyond the temporal and spatial confines of the event."

CRA, Rota and Burdett are developing Rome's bid for the expo in collaboration with engineers Arup and Systematica, and landscape designer LAND.

The masterplan proposed for a site in Rome's Tor Vergata district, which is home to a university of the same name, a residential area and the Vela sports complex by Santiago Calatrava.

Its solar farm would be made up of hundreds of square-shaped "energy trees", incorporated into the dedicated plots of each nation and engineered to open and close their panels throughout the day.

While harvesting energy, these structures would also provide shade for visitors exploring the site and form a mosaic-like structure when viewed from above.

Another one of CRA, Rota and Burdett's ambitions for the solar farm is for it to decarbonise surrounding neighbourhoods by supplying them with renewable energy.

"The master plan's vision of the Expo Solar Park ensures that the event will not only reinvigorate the neighborhood, but help decarbonize it," explained CRA.

"The solar farm in Rome covers an area of 150,000 square meters and boasts a production capacity of 36 megawatt-peak, making it the largest urban, publicly accessible solar farm in the world," the studio claimed. 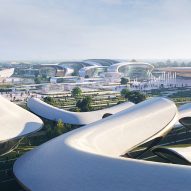 Rome's bid for the World Expo 2030 is divided into three districts, named the City, the Boulevard and the Park. Laid out from east to west, they would take visitors on a journey from an urban to a more natural environment.

The solar farm will sprawl across the central spine of the masterplan, named the Boulevard, which will also incorporate all of the national pavilions.

On its west side will be the City, housing all of the expo's operational buildings, while on the east side, the Park district will be filled themed green spaces.

Dotted between these districts will be five landmark pavilions, each dedicated to a different theme, as well as a series of existing buildings in the area, including Calatrava's Vela sports complex.

The masterplan is hoped to revitalise the Tor Vergata area, with the City district converted into an extension for the University of Tor Vergata and the pavilions transformed into an innovation district for Rome after the event.

"After the 2030 World Expo, all the event pavilions will be used for different functions, giving shape to a new innovation district in the Italian capital."

The theme for the World Expo 2030 is named People and Territories, Together: Urban Regeneration, Inclusion and Innovation.

Other cities bidding to host include Busan in South Korea, Riyadh in Saudi Arabia and Odesa in Ukraine. The host will be decided with a vote by the 170 members of Bureau International des Expositions (BIE) organisation in November.

Odesa's bid, designed by Zaha Hadid Architects, focuses on providing participating nations with a kit of parts to build their own dismantlable pavilions.