Dutch architecture studio MVRDV has unveiled designs for a 140,000 square metre library in Wuhan, China, with a sweeping form that takes cues from the topography of its surroundings.

Designed by MVRDV in collaboration with UAD, Wuhan Library will be located beside the Baofend Overpass  and is set to become one of China's biggest libraries.

Renders of the building detail the structure set on a plinth that cantilevers to a hexagonal-shaped plan with sweeping and curved elevations that rise to a peak at its shortest, south-facing side.

The exterior walls of the structure will comprise large windows that stretch wholly across three sides of its multi-faceted elevations, while its other three elevations will feature a "bookshelf facade" and use louvres organised in a bookshelf-like pattern.

Each of the three, glazed facades will provide the interior with views of different vantage points of the city, including the skyline of the Central Business District, an adjacent park and the adjoining ground-floor plaza.

A series of tiered terraces, that will house the library's books and activity areas, will flank the interior of the structure with ground-floor channels bisecting between the terraces which will function as accessible public space.

The studio explained the terraces and its ground floor public areas were designed to reference Wuhan's rivers surrounded by the city landscape. 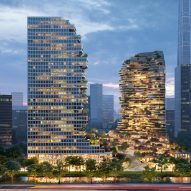 "The interior concept further reinforces the notion of Wuhan's position at the confluence of rivers, surrounded by the city landscape," said MVRDV.

"The stepped terraces of books invoke the sculptural lines of a canyon, with a broad ground-floor public space that visitors can enjoy throughout the day."

"This is nature versus the city, and the building is somehow focusing on this. I think this makes it an exciting place to gather," said MVRDV founding partner Jacob van Rijs.

MVRDV's plans were selected as the winning entry in the international competition to design the Wuhan Library, which was first launched in April 2022.

The landscaping surrounding the library will complement the local environment and climate conditions, incorporating low-maintenance native plants and tall trees that will provide outdoor shaded areas.

Louvres, used across the bookshelf facade, will be highly concentrated in areas where sunlight hits the building to shade the interior. As the building is set to be built on a plinth, the ground floor perimeter of the structure will be shaded as a result of its cantilevered edges.

According to the studio, a number of solar panels will be fitted to the roof of the structure to provide the building with renewable energy.

MVRDV recently revealed its design for the Oasis Towers development in Nanjing, China, a pair of two L-shaped skyscrapers with angular cliff-like facades.

In 2022, Norwegian architecture studio Snøhetta unveiled designs for a 16-metre-tall glass-enclosed library in Beijing that featured pillars that create a forest-like canopy within the interior.

The renders are by MVRDV unless stated otherwise.