International architecture studio HKS has placed an entertainment venue called YouTube Theater under the sweeping canopy of an NFL stadium in Los Angeles.

HKS designed the theatre, which opened in 2021, to fit underneath the massive ethylene tetrafluoroethylene (ETFE) canopy at SoFi Stadium, which was also designed by the studio.

The 6,000-seat YouTube Theater is nestled into the south side of the canopy and was designed as the stadium was being built.

"As the stadium rose, we had to figure out how to create a fully enclosed theater underneath the shared massive roof canopy," said HKS project architect Michelle Stevenson.

"We were catching up to the much larger stadium project's construction throughout the process and essentially, building a ship in a bottle."

The facade of the three-storey theatre shares characteristics with the overhead roof, with white concrete panelling and large panes of convex glass.

This exterior structure wraps encases an atrium between the walls and the theatre, hosting lobby and a variety of amenities and a mezzanine. The mezzanine extends outside into a terrace that overlooks the outdoor concessions and gathering spaces placed underneath the canopy.

In the atrium, a chandelier made with Kaynemaile architectural mesh hangs from the balcony down to the ground floor.

The theatre itself consists of a rounded, blue-panelled envelope that encases the seating bowl and the stage. 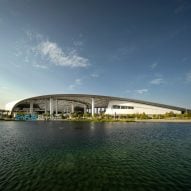 "During the evenings, the building looks like a lantern lit from within, complete with a shining jewel at the core," said HKS.

A mid-century sensibility was applied to the interior architecture, and the design team used "lush textures, geometric patterns, and metallic and jewel-toned finishes" meant to be decorative yet durable because of the high volume of people expected at events throughout the year.

"We wanted to make sure the interior architecture would offer exceptional experiences for performers and audience members and that it was not just a black box, but something that really pushes innovation," Stevenson said.

The theatre was designed in a way that conformed to the shape of the canopy while maximising amenity space and sound quality.

"The seating bowl is shaped like a fan so sound spreads through all sections evenly, and nearly every surface is covered in fabric including acoustic wall panels, rigging structures and seating," said HKS.

"Each of these design measures limit unwanted feedback and distracting sound patterns."

The theatre and stadium are part of a 300-acre entertainment and residential complex developed by Los Angeles Rams owner Stanley Kroenke.

Other recent theatre designs in the United States include DS+R's plans to renovate Frank Lloyd Wright's only completed theatre as well as Tod Williams and Billie Tsien Architects, and Diamond Schmitt Architects' renovation of David Geffen Hall for the New York Philharmonic.

The photography is by Bruce Damonte, unless otherwise stated.