The 150-metre-high skyscraper will be located in Zhuhai in China's Pearl River Delta, close to Macau and Hong Kong, in a neighbourhood that's currently changing from an old industrial zone to becoming more high-tech.

"It acts as a powerhouse that accelerates nearby urban redevelopment."

Its corners were rounded to give the 35-storey office building a more streamlined silhouette.

The core of the main North Xingge Jinze building was hollowed out to "encourage wind circulation," the studio said, while a cut-out on one side will hold a sky garden.

By hollowing out the centre of the main building, Aedas aimed to create a facade that would produce a "dynamic visual experience" when seen from different angles. 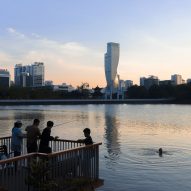 Aedas unveils "most twisted tower in the world" in Chongqing

The skyscraper's core compartment will be located in a smaller tower next to the main skyscraper, while elevators to the upper floors can be found in the centre of the skyscraper.

Aedas has created a number of high-profile projects in China and recently unveiled the "most twisted tower in the world" in Chongqing. It is also designing a Beijing civic centre with an undulating, curved roof garden.