Off-white stucco walls and a round staircase characterise the Chiripa housing complex in Mexico, which architecture studio Palma designed as a "hybrid" experiment merging residential and hotel-style living.

Located on a steep site in the Mexican town of Sayulita along the Riviera Nayarit, Chiripa consists of two geometric volumes that are connected by stacked bridges and have been divided into six separate living units.

Mexico City-based Palma arranged the four-storey parallel volumes so that they are facing each other, but positioned in opposite directions.

This formation was designed to create unobstructed views of the Sayulita bay and grant privacy to residents, as well as enhance the complex's cross ventilation and exposure to natural lighting.

Clad in stucco, Chiripa's neutral facade is offset by a bright blue hue that colours the units' doors, flooring and window frames, adding bold accents to the building.

"The implementation of stucco on the walls, in an off-white tone, serves as a backdrop for the shadows cast by the vegetation growing in the different green areas of the complex," said Palma.

The studio also added perforated brick walls that create dramatic shadows on the exterior walls of each volume.

Visitors enter Chiripa from the top of the lot through a walkway above the central garden, which creates a communal entrance to the complex.

At the end of the walkway, an open-air staircase shaped like a half circle serves both blocks, which each feature squat, rounded swimming pools on their rooftops.

Although only two levels are visible from the front facade, two additional levels feature below street level thanks to the site's steep slope.

Individual rooms have been arranged across both the upper and lower levels of the volumes, including living spaces and bedrooms characterised by simple and utilitarian interior details.

At the south end of each level, Palma designed covered terraces with curved inbuilt seating and enough space to suspend a hammock. The studio chose floor-to-ceiling glazing to illuminate the units.

The architecture studio intended for Chiripa to serve as a flexible building that caters to a range of living needs – either permanent or temporary. 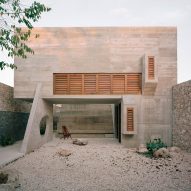 "Chiripa is a project that seeks to experiment with the way users relate to each other in an undefined typology, a hybrid between house[s], apartments [and] hotel[s]," explained Palma.

"Depending on the needs of the visitors [the units] can be used in different configurations, constantly modifying the way in which they are inhabited," added the studio.

Palma's portfolio of architecture projects also features a coastal home with a custom yoga patio and another Nayarit residence with a statement circular swimming pool.

Elsewhere in Mexico, local studio Zeller & Moye has completed an earthquake-resistant housing block arranged around a central courtyard in the country's capital city and architects including Tatiana Bilbao and Frida Escobedo designed low-cost social housing for a community development in Hidalgo.