Architecture studios Carmody Groarke and TRANS Architectuur Stedenbouw have collaborated with material researchers to develop a brick made from local construction waste, which will be used to build the new wing of the Design Museum Gent.

The Gent Waste Brick was designed together with circular economy specialist Local Works Studio and materials manufacturer BC Materials to be low-carbon, reportedly carrying just one-third of the embodied carbon of a typical Belgian clay brick.

The brick is made from 63 per cent recycled municipal waste sourced from Ghent, which was collected from a local recycling centre for demolition concrete and glass.

These recycled materials are mixed with lommelzand sand from the Belgian municipality of Lommel and bound together with hydraulic lime and ground calcium carbonate.

The bricks are cured in a humid environment for two weeks and then left to air-dry rather than being fired, reducing the amount of energy needed to manufacture them.

Instead, the material gets its strength through a process known as mineral carbonation, which involves the calcium carbonate in the brick reacting with carbon dioxide in the surrounding air. 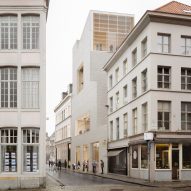 "The carbonation will continue forever on the facade, making the blocks stronger and stronger over the years," TRANS Architectuur Stedenbouw told Dezeen.

"This fabrication process, coupled with the use of recycled composites, results in a brick with 0.17 kilograms of CO2e per kilogram – just one-third the embodied carbon of a Belgian clay-fired brick."

Designed for the external facade of Design Museum Gent's new wing, the Gent Waste Brick has a pale grey colour that references the colour of other civic buildings local to the city and was certified for building use in September 2022.

"The team have worked closely alongside the Design Museum Gent to produce a highly crafted, bespoke material object that embodies the culture and ethos of the institution, challenging the material qualities and aesthetic properties of a traditional brick and adding to the lineage of design objects displayed and cared for by the museum," said Carmody Groarke.

Design Museum Gent is organising workshops for local residents to take part in making some of the bricks that will be used in the extension's construction.

"The bricks will be manufactured on a brownfield site in Ghent using a clean simple production process, which could easily be replicated in other urban settings," said Carmody Groarke. "There are no resultant emissions, by-products or waste."

Other brick alternatives featured on Dezeen include Kenoteq's unfired K-Briq, which is made of 90 per cent construction waste, and masonry blocks made from algae-based cement by Prometheus Materials.

The photography by Cinzia Romanin and Thomas Noceto unless stated.