London design studio Special Projects has worked with clinical psychologists to develop SlowMo, a mental health app for people experiencing psychosis that will be trialled by the UK's National Health Service.

Designed to work alongside in-person therapy, the SlowMo app allows users to identify and record unhelpful "fast-thinking" patterns and slow them down through the use of animated bubbles.

The programme has been in development for the last five years, led by research clinical psychologist Amy Hardy and her team at King's College London. Special Projects came on board following a controlled trial to hone the user experience, strategy and branding.

The app's primary function is to help users monitor and recall these unhelpful thoughts, which they can identify and name by creating a grey "worry bubble" that is then scaled to represent how severe the worry feels at the time.

Later, they can discuss these worries with their therapist. But in the moment, the app gives users the opportunity to address them independently, with prompts encouraging them to reframe their view and consider factors that may be causing fast-thinking patterns.

"How would you see things if you were in a better mood," the app asks. Or: "could it be about them, not you?"

"Paranoia is often associated with fast-thinking habits, such as jumping to conclusions," Special Projects co-founder Clara Gaggero told Dezeen. "The SlowMo process of 'slowing down' provides patients with tips to notice new information and prompts them to formulate 'safer thoughts' to reframe their mindset."

These safer thoughts take the form of iridescent-coloured bubbles with statements drawn from the tips that users found resonated with them. "It's just a coincidence" or "it's not about me", they might read.

"The 'slowing down' process may initially take a few moments, but it eventually becomes second nature, helping users not to jump to conclusions for any worrying thoughts," Gaggero said.

Outside of this functionality, the SlowMo app also contains a "toolkit" of other resources for users, alongside content such as interactive activities for therapy sessions.

Special Projects designed the architecture of the app based on interviews with people who have lived experience of psychosis. This helped the studio understand how to evolve the app, prioritising positive interactions and the emergency slowing-down functionality. 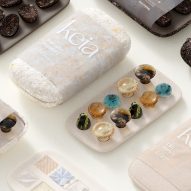 The interviews also led the studio to prioritise transparency and data security in the design, as concerns about being followed and tracked online feature heavily among people who experience psychosis.

As a result, the app is designed to store all personal content locally on the patient's device, and the user can actively choose what information they want to share with their therapist every time they are synching data.

For instance, they might have recorded four thoughts that were concerning to them but choose to share only two with the therapist.

And since one-quarter of people with severe psychosis do not own a smartphone – and others might not want to take it out in public – there is also a physical deck of cards with tips to serve as an alternative to the app.

Users can keep cards in their pocket and peek at them for a prompt to help them avoid spiralling into worrying thought patterns.

The SlowMo team has been awarded £1.3 million in funding from the Wellcome foundation to develop the app beyond its current clickable prototype form and test it across three National Health Service (NHS) trusts. The plan is to eventually offer it across the whole NHS.

The team hopes SlowMo will help to overcome the limitations of current medications and talking therapies, which they say are often harder for marginalised groups to access while delivering poorer outcomes and adherence.

"Contrary to the fast-paced approach adopted by many tech companies, the team at King's College London has focused on doing the right thing, thoroughly and in an evidence-based way," said Special Projects co-founder Adrian Westaway.

"The depth of the research and clinical studies combined with the focus on inclusivity and addressing the digital divide has made this an important collaboration for us to take part in."

Mental health apps have proliferated in recent years along with the rise in telehealth. While offering benefits such as reduced costs and improved access, such services are also criticised for deprioritising personal interaction with a medical professional and compromising data security.

Other design studios that have explored the use of apps for mental health include NewTerritory, which has created a concept for psychedelic-assisted therapy called Human Nature.