Architecture studio OMA has designed the backdrop for the inaugural Islamic Arts Biennale, which is being hosted in the Western Hajj Terminal at Jeddah airport, Saudi Arabia.

OMA designed the overall identity for the Islamic Arts Biennale, which is being co-curated by South African architect Sumayya Vally and opened to the public earlier this week.

The biennale is being hosted within the Western Hajj Terminal at King Abdulaziz International Airport in Jeddah, which was designed by US studio Skidmore Owings & Merrill in the early 1980s.

Made from a series of fibreglass fabric tents suspended from steel pylons, the distinctive building won the Aga Khan Award for Architecture in 1983.

OMA's design for the event aims to complement the existing building.

"Our scenography design aims to create a space that works with the cable-stayed, fabric-roof of the Hajj Terminal – a seminal piece of modern architecture known to Muslims around the world – literally reinventing it as an umbrella for Islamic Arts," explained OMA Associate Kaveh Dabiri.

The studio designed two distinct areas for the biennale. Under the terminal's open canopy it created a "desert-like landscape" that was informed by Mohamed's journey from Mecca to Medina – known as Hijrah.

The landscape consists of sand-coloured slopes and slanted walls to display the artworks while creating a "sense of exploration".

An enclosed area contains a sequence of galleries displaying artworks.

Described as "a journey from darkness to light", the sequence begins in a dimly lit room containing 17th-century artefacts and ends in a bright space where the first Saudi door of the Kaaba – the building at the centre of the Masjid al-Haram mosque in Mecca – is on display. 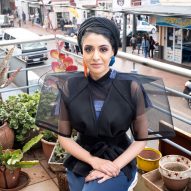 "This exhibition is an opportunity to discover and learn about Islamic culture," said OMA partner Iyad Alsaka. "More than 200 ancient objects are on display, some of which have never been seen by the larger public."

"In addition, there are artworks by contemporary artists from Saudi Arabia and other countries in the Middle East and northern Africa to countries like the UK and South Africa, giving a new dimension to the timeless rituals of Islam," he continued.

The event aims to celebrate Islamic art and culture while exploring "spirituality in the aesthetic realm".

The installation is OMA's first project in Saudi Arabia. The studio has previously designed several projects in the Middle East including the Qatar National Library and the headquarters of the Qatar Foundation in Doha.

The photography is by Marco Cappelletti.

The Islamic Arts Biennale takes place in Jeddah from 23 January until 23 April 2023. See Dezeen Events Guide for an up-to-date list of architecture and design events taking place around the world.