South African architect Sumayya Vally has been appointed to the curatorial team for the first Islamic Arts Biennale, which is set to take place in Jeddah, Saudi Arabia.

Organised by the Diriyah Biennale Foundation, the Islamic Arts Biennale is scheduled to take place in December 2023 in the city of Jeddah on the west coast of the country.

Vally (pictured top), who is the founder of architectural studio Counterspace, will curate the event alongside architect Omniya Abdel Barr, archaeologist Saad Alrashid and director emeritus of the Smithsonian's National Museum of Asian Art Julian Raby.

Biennale to take place in December 2023

Originally intended to take place in the Saudi capital of Riyadh, the biennale was moved to Jeddah due to the city's cultural heritage.

"I have visited Jeddah as a pilgrim many times," said Vally. "The location has so much embodied meaning that speaks to both communal and individual experience."

"Alongside my curatorial colleagues, I am inspired by the opportunity to present a range of works in this extraordinary setting," she continued. "I hope many will join us in December for an exploration that is open to all."

"Cultural and artistic exchange are essential"

The event aims to celebrate Islamic art and culture while exploring "spirituality in the aesthetic realm".

"Cultural and artistic exchange are essential in this period of unprecedented growth and development in the creative community in Saudi Arabia," said Saudi minister of culture Badr bin Farhan Al Saud. 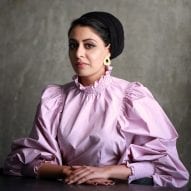 A range of hotels and resorts are being developed in the country, designed by some of the world's leading architects.

French architect Jean Nouvel is designing a cave hotel in the AlUla desert while Foster + Partners and Kengo Kuma and Associates are among the studios developing a series of islands as part of The Red Sea Project.

Counterspace founder Vally designed the 2021 Serpentine Pavilion in London and was recently named one of Time magazine's 100 leaders of the future.

The Islamic Arts Biennale will take place in Jeddah in 2023, dates are yet to be announced. See Dezeen Events Guide for an up-to-date list of architecture and design events taking place around the world.

The photography is courtesy of Mikhael Subotzky.