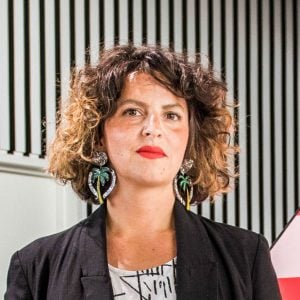 French designer Camille Walala is founder of a textiles, fashion and interior design studio.Now based in East London, Walala grew up in the south of France and studied textile design at the University of Brighton. Returning to London after completing her studies, Camille designed cushions to sell at Broadway Market, where she worked at a small textile shop, and began selling her pieces online.

Walala founded her eponymously named studio in 2009. Recent work has seen Walala expand her textiles range to include interior design and art direction. In 2012, the owner of Shoreditch nightclub XOYO invited her to bring her unique style to its interior. Recent projects include a colourful labyrinth installation inside London’s New Gallery, and a building block castle and multicoloured pedestrian crossing for London Design Festival.

Camille’s signature Tribal POP style is influenced by the Ndebele tribe, the Memphis Movement, and Optical Art master Vasarely, alongside the desire to put a smile on people’s faces. Walala has a continued love affair with pop-up restaurants, where her love for food and design are combined.