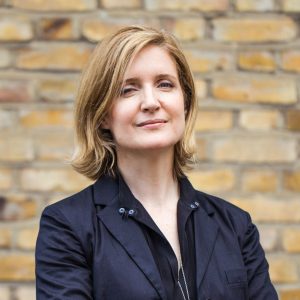 Saunt was born in Australia and grew up Kenya and England and studied at Heriot-Watt University and the University of Cambridge. She worked for architects Colin St John Wilson, MJ Long and Tony Fretton before setting up DSDHA in London with her partner David Hills in 1998.

Their Christ's College school in Guildford, England was shortlisted for the Stirling Prize in 2010. Current projects include the public realm around the Royal Albert Hall in South Kensington, and the refurbishment of Alison and Peter Smithson’s iconic Economist Buildings in central London.

Saunt teaches extensively. She has lectured in Switzerland, Iceland, Spain, the UK and the USA, and is on the founding faculty for the newly launched London School of Architecture, which aims at bridging the gap between academia and practice while making architectural education more affordable.