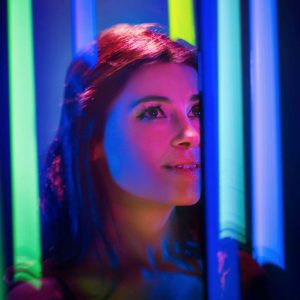 Devlin creates kinetic sculptures in theatre, fashion, dance, music and opera. Since working in small experimental London theatres, over the past two decades she has designed sets for Milan’s La Scala Theatre and London’s National Theatre, Royal Opera House and Sadler’s Wells Theatre. She has gone on to create works for stadia and arenas, including Wembley Stadium, London and Rio’s Olympic stadia, and the 02 Arena.

Devlin has designed stage sculptures in collaboration with Adele, Beyoncé, Jay Z, Kanye West, Katy Perry, U2 and The Weeknd. She designed the Rio Olympic opening ceremony and the London Olympic closing ceremony, and continues to work in theatre. Recent London theatre projects include Girls & Boys starring Carey Mulligan at the Royal Court Theatre, Hamlet starring Benedict Cumberbatch at the Barbican, and Ugly Lies the Bone at the National Theatre.

Her solo installation works include: Room 2022 at the Miami Beach Edition Hotel; The Singing Tree at the V&A; and the scent-infused Mirror Maze, inside a former warehouse in Peckham, London.

Devlin is a fellow of the University of the Arts London and was awarded an OBE in 2015. She has received three Olivier Awards and was awarded the London Design Medal in 2017. Her work features in the new Netflix documentary series Abstract: The Art of Design.

Es Devlin was named in the top 300 most influential names in design in the 2017 Dezeen Hot List. Dezeen have also made a list of Devlin’s 12 best projects.