Designer Es Devlin created an all-blue stage set for the Girls & Boys play at London's Royal Court Theatre, which charts the dissolution of a woman's marriage through different video projections.

London-based Devlin created two sets for the play, which sees a working-class woman played by British actress Carey Mulligan directly addressing the audience to recount the story of how she met her then partner.

One of the designs is a simple blue screen, while the other is an open-plan living room and kitchen.

After constructing this lounge-like setting out of real, ordinary household objects and children's toys, Devlin then sourced, photographed and 3D-scanned each item and surface.

Once all the surface data had been recorded, Devlin and her team then painted the entire set in a vivid turquoise.

Video designer Luke Halls used the surface data to create a virtual version of the set in all its original colours, which is then precisely mapped back onto each surface throughout different points in the play.

During the play, Mulligan's character continues to switch between delivering monologues in front of a plain blue screen, and acting out memories with her two invisible children in front of the monochrome turquoise living room setting.

It becomes apparent that she is reenacting these scenes in an attempt to rewrite her own memories, erasing the involvement of her husband after the tragic loss of their children. 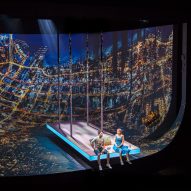 "The key to the design is the 'hinge' between the states of direct engagement with audience and interaction with remembered space and children," said Devlin.

"Director Lyndsey Turner and I acted out the transitions between scenes in my living room, which is full of kids' debris," she continued. "Each time the character engages in a memory sequence, a normal looking room gets instantly fogged and muffled in pastel turquoise matt colour."

The designer told Dezeen how she wanted to create the illusion that a full-colour set was being instantaneously painted with blue light or paint live during the play.

The living room is first revealed in the process of "losing its memory," Devlin explained, as it turns from its normal full colours to one shade of blue.

Following this, each time the play transitions from a section of monologue to an enacted memory, the black screen disappears and the virtual 3D scan is projection mapped precisely onto every object and surface in the room, momentarily returning it to its original full colours.

With each projection, the colours get stronger. Devlin told Dezeen that she used these colour shifts to reflect the gradual loss of Mulligan's memories as she succeeds in rewriting them.

"In each subsequent transition, [the room] tries to recapture its memory in richer colour, and with repeated and immediate loss," Devlin said.

"During the scenes and monologues, the sculpture behaves primarily as counterpoint and foil to the text and its performance – during the transitions it enacts something analogous to the protagonist's ritual of remembering each scene with the children while erasing the memory of their father,” she explained.

Girls & Boys marked the first collaboration between writer Dennis Kelly and director Lyndsey Turner. The play was on show at the Royal Court Theatre in London and ran from 8 February till 17 March 2018.

Devlin also created the stage design for a theatre performance at London's National Theatre this time last year, where she used a basin-shaped map as the canvas for video projections for Ugly Lies the Bone, which followed an injured soldier undergoing virtual-reality therapy.