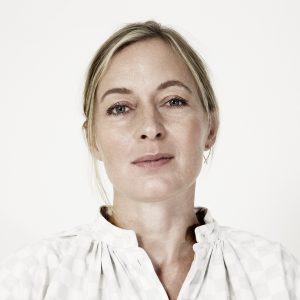 Danish designer Cecilie Manz is founder of her eponymous studio based in Copenhagen.

Educated at Danmarks Designskole in Copenhagen and University of Art and Design in Helsinki, Cecilie Manz founded her studio in 1998. The Danish designer creates one off pieces and sculptures as well as lighting, furniture, glass and homeware products. She has designed products for a variety of brands including aluminium lampshades for Light Years, portable speaker for Bang & Olufsen, and theatre box-shaped shelves for Iittala. One of her most recently projects includes a collection of minimal furniture for Glosters, headquarters in Germany aimed to create a relaxed moments for the user.

In 2015, Manz participated in an exhibition hosted by GamFratesi at Milan design week. Manz displayed her work in a black cage on top of a mirrored floor alongside fourteen other designers and artists including Ole Jensen.

Manz’s work has been recognised worldwide, she has been exhibited in museums and galleries including the Vitra Design Museum, Issey Miyake Design Studio Gallery and the Danish Museum of Art and Design. She has been the recipient of multiple awards for her work including Kold Christensen’s Award of Honour, the Crown Prince Couples Cultural Award and the Red Dot award amongst other.

In 2018 was elected Designer of the Year by Maison&Objet.