Unveiled at Milan design week, the Beoplay P6 was designed by Manz and Bang & Olufsen to be beautiful, while also offering a rich quality of sound.

It forms part of the collection of products offered by B&O Play, Bang & Olufsen's specialist headphone and speaker brand.

"We wanted really powerful sound in a very small package, and we wanted a 360 degree array of sound because we knew that people move around their homes in their daily activities," Kalle Nordbo concept and design manager of B&O Play told Dezeen.

"People like music, it lifts up people's lives," continued Nordbo. "This compact form can be placed anywhere. Cecilie had some interesting ideas about two aluminium shells coming together, but we also wanted to challenge aluminium as a material."

The speaker's shell is constructed from anodised and pearl-blasted aluminium, which is perforated with Bang & Olufsen's characteristic hole pattern.

The biggest challenge was creating a form that allowed for this pattern, but which could also be gripped from any angle. 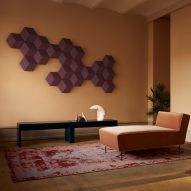 "With Beoplay P6, we really pushed the physical limits of the material by punching holes into a three-dimensional aluminium shell," Manz told Dezeen.

The speaker blends technological innovation with a retro twist, explained Manz. "The buttons are very old-school. You get this tactile feedback from them and that's really comforting."

"There has been lots of talk about technology versus craftsmanship lately, but craftsmanship is actually very heavily involved in the technological world too. We just need to be careful that craftsmanship doesn't get so trendy that people forget the whole point of it."

Designed so that it is stable when standing, the speaker is splash- and dust-resistant, meaning that it can be used in any room. A leather strap, which contrasts with the aluminium shell, can be used to carry it.

"The shape caters to the two main ways Beoplay P6 can be used – standing in that special spot in your home, and portability when bringing it with you," said Manz.

The Beoplay P6 comes in two colours – black and "natural" – and offers up to 16 hours of play time for a single charge.

With the Beoplay P6, the company aimed to reference one of Bang & Olufsen's iconic products from the 1970s – the Beomaster 6000 sound system. As a result, controls can be found on the top of the product, in the form of flex buttons integrated into the casing.

The Beoplay P6 was unveiled this week for the first time at Bang & Olufsen's Milan showroom on Corso Garibaldi, as part of an exhibition called My Sound, My Space.