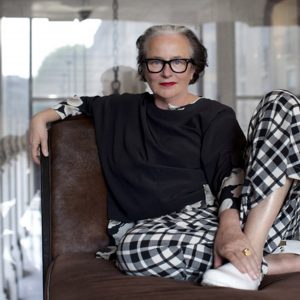 Li Edelkoort is founder of forecasting agency Trend Union, based in Paris.

Edelkoort travels the world researching and creating trend forecasts on topics from fashion and textiles to cars and food, which are then used by international brands. Her diverse clients range from creative studios to banks, including Lacoste, Nissan and Coca-Cola. In 2018 she collaborated with Google to explore how digital devices can be more sensorial.

She was director of Design Academy Eindhoven from 1998 to 2008, also establishing Designhuis during that period. In 2011, she established Poland's School of Form, which combines the study of design and humanities.

The trend forecaster is an advocate for cities being design-centric and has acted as an advisor for implementing creativity and innovation in cities. She has curated numerous exhibitions at museums and galleries worldwide, including an exhibition showcasing Issey Miyake garments at Design Museum Holon and the Fetishism in Fashion exhibition at MoBA 2013.

Edelkoort has received multiple awards and honours, including being named one of the 40 most influential people in design by Icon magazine and was named an honorary Royal Designer for Industry by the Royal Society of Arts in 2014.

In 2018, she received an honorary doctorate of art from Nottingham Trent University, was awarded the Chevalier of the Order of Arts and Letters by the French minister of culture and became a knight of the Order of Oranje-Nassau.