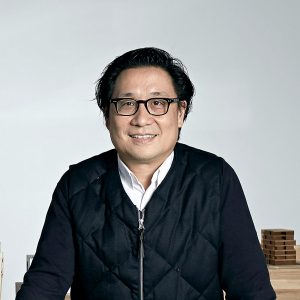 Chinese architect and designer Lyndon Neri studied at UC Berkeley, receiving his Masters degree at Harvard. In 2004, he co-founded international design practice Neri&Hu and design platform Design Republic with partner Rossana Hu. Recent projects include a stainless steel and neon retail interior in Shanghai, a store for Valextra inspired by libraries and the Pantheon oculus and a brick-walled boutique hotel around Yangzhou's man-made lakes.

Invited as a guest speaker to many international prestigious events, most recently at the Stockholm Furniture and Light Fair alongside their Unfolding Village installation, Neri&Hu's active involvement in research and debate made them the Norman R. Foster Visiting Professor of Architecture at Yale University in the fall of 2018.

Neri was inducted into the U.S. Interior Design Hall of Fame in 2013 and together with Hu, he was named Maison&Objet’s Asia Designers of the Year in 2015 and Interior Designers of the Year by Iconic awards in 2017 by German Design Council. The duo have been awarded by magazines such as Elle Deco, Wallpaper* and Architectural Review for their work in architecture and design.