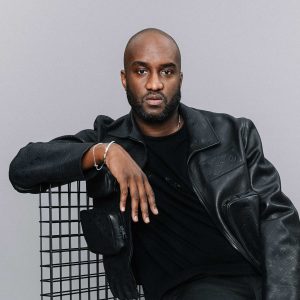 American designer Virgil Abloh obtained his masters degree in architecture from the Illinois Institute of Technology, where he was introduced to Bauhaus characteristics of merging art into design. Abloh explained to Dezeen in 2017 the lasting effect that modernist architect Mies van der Rohe has had on his aesthetic.

Abloh formed his luxury streetwear brand Off-White in 2012 and has since collaborated with Nike on The Ten in 2017. Featuring 10 iconic trainers redesigned by Abloh, his adaptation of the Air Jordan 1 was named Shoe of the Year at FN's Achievement Awards in 2017. The same year, Abloh was nominated for Swarovski's Award for Emerging Talent and won GQ Men's International Designer of the Year Award.

The designer's projects include a slogan-covered furniture series and statement rugs in collaboration with IKEA and designing tennis player Serena William's kit for the US Open in 2018. He recently featured on-screen at Design Indaba, sketching a design for a city with long-time collaborator Dong-Ping Wong. His work will be the subject of two exhibitions opening later this year at Chicago's Museum of Contemporary Art, which will focus on past and upcoming projects.

In 2018, Abloh was named artistic director of menswear for Louis Vuitton and showcased his inaugural collection for the fashion label in Paris in June.

Abloh has been included on Time magazine's list of 100 most influential people in the world.