Los Angeles based furniture designer David Okum has reimagined the extension cable to create a flexible row of wooden spheres and cubes containing multiple sockets that also prevent the cable from tangling.

Made from cubes and spheres of Connecticut hard maple and zig-zag cloth-covered cable, the Oon has been designed as an alternative to the white plastic extension cable that can be found in millions of homes.

"While organising our design studio, I couldn't help but notice the thoughtless power cord that ended in a tangled mass in plain sight. I wanted to replace it with one a bit more inspired and found nothing on the market," David Okum told Dezeen. "Being a product designer, I naturally took it upon myself to design one I would want to use."

It features three plug sockets that rotate to suit different situations and a cable that extends to six feet.

"The shape of the product is inspired by my love for simple geometric shapes," explained Okum. "The final form was refined through multiple iterations used in real life." 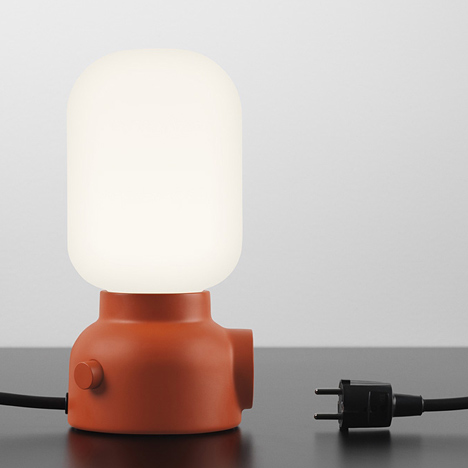 Plug Lamp by Form Us With Love for Ateljé Lyktan

The spherical shapes were included to prevent the cable from tangling on itself, while the blocks house the sockets themselves and provide stability. Oon uses self-contained sockets made in the USA that are polarised for extra safety.

Okum chose materials that would be hardwearing but could also be used to create an object that homeowners would be happy to leave on display rather than hide away.

"The wooden cubes require an eleven step process to go from rough lumber to completed socket," he explained. "Our products continually go through refinements and tweaks even after they are said to be complete."