Korean artist Seon Ghi Bahk has created a series of installations using pieces of charcoal suspended by nylon threads in an exhibition which aims to examine the relationship between natural materials and man made objects (+ slideshow).

Known for his intricate artworks in the form of representational and abstract shapes, Seon's most recent installation at Miami's Zadok Gallery includes precise formations of charcoal fragments in the shape of shattered columns, orbs and other objects that explore the relationship between nature and mankind. 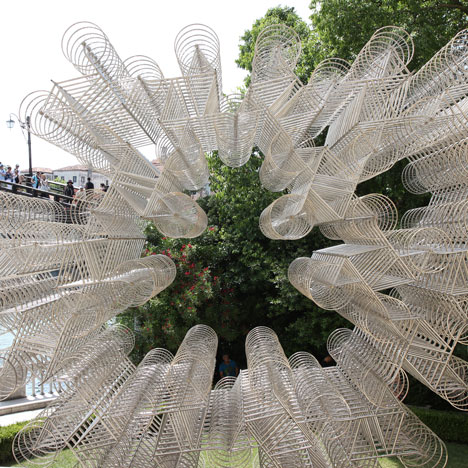 By reimagining wood charcoal as architectural forms designed by humans, Seon aims to draw attention to the connections between the natural and man-made worlds.

"Because these airy columns appear to be in various states of completion or decay, viewers are led to consider the impermanence of human civilization and the complex relationship of all things to nature," said a spokesperson for the gallery.

"According to Seon Ghi Bahk, the idea that man and nature can exist separately is pure fiction. His work points out that humankind is not only derived from nature, but cannot exist without it."

Fiction of the Fabricated Image is at Zadok Gallery until 25 August 2014.

Other suspended installations we have featured include a series of moving plastic mobiles, and a floating spherical object that drifts through public spaces recording conversations.