UK office Invisible Studio has built a workshop for itself near Bath using reclaimed materials and timber from the surrounding woodland (+ slideshow).

Invisible Studio's new workshop is built using untreated and unseasoned timber grown on-site, which was milled over two days. The frame was then erected over two weeks, and the rest of the building was completed over two and a half months.

Invisible Studio's founder, Piers Taylor, led the project and built it with friends, neighbours and colleagues – none of whom had constructed a building before. 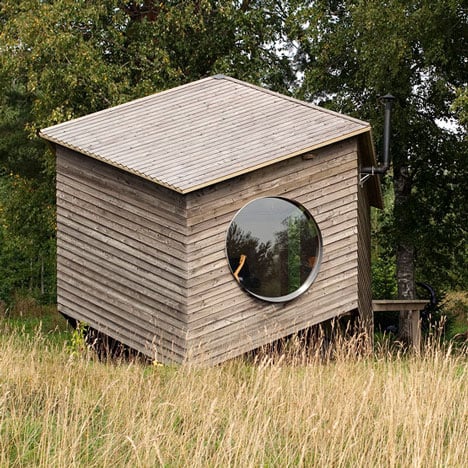 "Their hand in the design was utterly essential. My role was more like a conductor. This wasn't about one person dictating the design from the top down," Taylor told Dezeen.

The collaborative process meant the team could build with minimal drawings and allowed ad-hoc discoveries and improvisation to be embraced during construction.

"The 'mistakes' of the unskilled team remain evident in the building, and no attempt was made to conceal them," explained Taylor.

"The building has an eccentric arrangement of internal studs, for example, and we kept these, because that was part of the joy of the process," said Taylor, who previously worked on a collaborative project with students from London's Architectural Association to build a faceted workshop.

The 55-square-metre studio is raised on stilts, creating space beneath for an open workshop where the office can make full-scale models. Concrete footings beneath the stilts were mixed by hand and designed to have as little visual impact as possible.

Reclaimed windows have been to create a wall, which faces south-west, attracting sunlight throughout the day. Timber from the scaffolding was re-used for the entrance bridge, and turned upside down for the flooring inside, which was coloured red using left-over paint from one of Invisible Studio's previous projects.

Insulation was pieced together from off-cuts, and additional heat is provided by a wood-burning stove, which uses waste timber from the site.

The exterior is covered in oriented strand board (OSB), which has been painted with a black waterproof layer. Untreated timber from the surrounding woodland has been fixed on top of this in horizontal stripes, and will age to a grey colour.

"The building is designed to settle down into the landscape and evolve over time," said Taylor.

A pond has been added at the foot of the building to catch excessive storm water and limit flooding further down the sloping site. It also doubles as a mini-wetland area to encourage biodiversity.

The workshop cost £15,000 to build, including materials and labour, with all participants paid an equal rate.

Photography is by Andy Matthews, unless otherwise stated.

Here is some more information from Invisible Studio:

This new studio for architecture practice Invisible Studio near Bath, UK, was built by the practice with the help of neighbours and friends (who were all paid an equal rate), using untreated and unseasoned timber grown in the woodland that surrounds the studio.

The studio is on two floors – there is a 55-square-metre enclosed space accessed via a bridge from the slope, which is above an open workshop for the practice to make full-scale models.

No-one who worked on the project had constructed a building before. The project was an exercise in establishing a system of building that could be constructed by unskilled labour.

All of the timber was milled over the two days that a mobile saw was booked, and the kit of parts was the trees that stood on the site of the studio. No other timber was used. This informed the building design, and the constraint of minimal cost and minimal design was embraced – for example, the cladding that was milled at the end of this period was just enough to partially clad the studio. The footings were mixed by hand, and designed to be the most minimal possible. The project was self-scaffolded by timber that was ultimately used for the bridge, and the floor, negating the need for expensive scaffold hire. The windows were scavenged from a skip, and the floor paint was left over from another project of the practice's.

All of the boarding used is the cheapest possible grade, and the insulation is carefully pieced together from off-cuts. The project is heated by waste wood from the woodland, and water from the roof feeds into an attenuation pond that forms a natural habitat.