University of Reading students have built a pavilion designed by Invisible Studio, which will be used by artists to showcase their work.

The timber pavilion will host the architecture school's end-of-year show and a series of two-day artist residencies, before being relocated to a primary school to be used as an outdoor classroom.

Named Urban Room, the pavilion is the third structure created by Invisible Studio and students at the University of Reading working with Xylotek Advanced Timber Structures and structural engineer Corbett and Tasker. It forms part of the students' coursework.

Like the previous two pavilions, the square building is made from pieces of larch with a diameter of 75 by 50 millimetres.

These timber strips are arranged in a diamond pattern that touches the ground at the pavilion's four corners.

The upper section of the pavilion is covered with corrugated fibreglass to create a protected space that can be used for events or to display art.

Invisible Studio designed the structure to help teach the architecture studios the reality of having to deliver a real project. 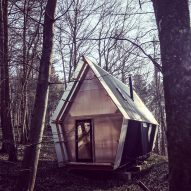 "This year we wanted to focus on what it meant to 'deliver' a project and empower the students with the skills to able to act as a designer AND maker for the following years," said Piers Taylor, founder of Invisible Studio and a PhD student at the University of Reading.

"There are an enormous amount of hurdles to jump through when delivering a building in a public environment and we wanted to expose the students to this," he told Dezeen.

The pavilion was designed so that all of the architecture school's second year students could work on it simultaneously as part of their coursework. It was built in four days.

According to Taylor, the project has given the students a hands-on experience that they would not normally have on an architecture course.

"As students, they only ever get to work on scale projects, not the 'real' full-scale thing like a cook or artist can," said Taylor.

"A project that allows them to realise a full-scale building that they can use for the next six weeks is a really valuable learning opportunity."

Invisible Studio was founded by Taylor in 2012. The studio has previously designed numerous predominantly timber buildings including a low-cost micro home, a composting toilet, and a workshop on stilts at its studio near Bath.

The Urban Room pavilion will stand for six weeks at the university before being disassembled and rebuilt at the Badgemore Primary School.