Architecture practice Invisible Studio has renovated a tired cottage in a valley in England by reconfiguring its cramped interior and adding a contemporary concrete and timber extension.

Designed for a playwright and a filmmaker, the overhaul rids the rural residence of its "rabbit warren of small spaces" and introduces views of the Surrey and Hampshire borders where it is located.

Bath-based Invisible Studio reorganised the home's entry and linked it to the extension, which is positioned at a right angle and features a double-pitched roof that echoes the cottage.

Unlike the existing building, the addition extends forward and features cantilevered living spaces on the first floor. This offers the owners a different perspective of the surroundings and also defines a patio space.

"[The clients] bought a very poky cottage with tiny rooms that had no clear organisation or arrival and they wanted us to resolve this plus extend in such a way to take advantage of views over the amazing valley," Invisible Studio's founder Piers Taylor told Dezeen.

"Instead of extruding the existing double-pitched cottage, we placed the extension at a right angle to the existing house, using the same double pitch but pushing the living spaces right out to the edge of the slope to give a different aspect onto the garden and create a courtyard in front of the house."

By reorganising the cottage's entrance sequence, the studio created space for a central hallway with a hung steel staircase and a large kitchen adorned with concrete cabinetry cast in situ.

Invisible Studio also created a larger bedroom and bathroom for the owners while creating a living space with sliding glass doors that allow the owners to "live in the view".

The extension has been clad in blackened timber as a nod to local vernacular. This forms part of a raw and tactile material palette that runs through the project, which also includes a mix of exposed concrete, plaster and steel.

These were chosen by the studio as they are durable and understated, forming a simple backdrop to the valley views and the clients' art collection.

According to Taylor, exposing the materials in this way was one of the most challenging aspects of the project.

"All the materials are fair-faced so had to be perfectly made," he reflected. "Nothing is covered up and everything exposed."

While unified by the material palette, the old elements of the house retain a "very different feel from the new" due to its scale and also the clients' selection of furnishings.

"The old has deep, rich colours and fairly decorative pieces which the client chose, and the new has a number of design classics and simple, robust furniture," Taylor explained. 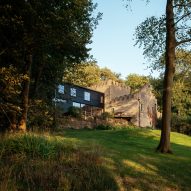 Other highlights of the interior include exposed timber trusses on the first floor, which were intended to create the feeling of sitting beneath a tree canopy in the main bedroom, and a hatch in the bathroom that looks through the bedroom to the outside.

In the living room is a structural concrete chimney breast that, with the help of a column, supports the extension's first floor where it cantilevers over the sliding patio doors.

As part of the project, Invisible Studio also created two outbuildings for the clients to use as workspaces. They are both clad in corrugated steel and lined with plywood.

Positioned opposite each other with their matching materials, they are designed to "feel like they're having a conversation with one another".

Founded in 2010, Invisible Studio is an architecture firm based in a self-built studio in a working woodland near Bath.

Other recent projects by the studio include a yoga studio with rammed-earth walls at The Newt in Somerset and the East Quay arts centre in Watchet.