Invisible Studio has built a gymnasium for a hotel in Somerset, which is designed as one giant window so that the building has a minimal impact on its garden setting.

Named Room in a Productive Garden, the building stands in the vegetable gardens of the Georgian-style Hadspen House, which has just opened as The Newt in Somerset hotel.

Invisible Studio designed the building as a giant window so that hotel guests using the gym would have no distractions from looking out onto the garden and the building would not stand out in its historic setting.

"It was conceived in a manner as 'no building'," said Invisible Studio founder Piers Taylor. "I guess what I mean by that is no 'obvious' statement building at the end of the vegetable garden – instead, its a simple piece of full-width glass in the wall," he told Dezeen.

The building replaces a wall that ran along the north boundary of a vegetable garden in a position where a greenhouse would have traditionally been built.

To build the walls of the gym the stones from the previous wall were crushed and then compressed.

"The stone was crushed and used for the walls. It relates by being the same material as the stone buildings that surround it, but used in a different way," explained Taylor.

While the side walls of the gym are made of rammed stone, the front facade is made from a single pane of  glass that is 15 metres wide and 3.3 metres high. 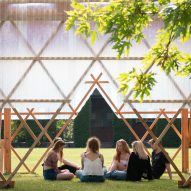 The large, single pane of glass was precisely engineered with a two-millimetre tolerance and was delivered by road from the factory in southern Europe.

Inside the gym the walls and ceiling are completely lined with beech slats with all the room's lighting and ventilation concealed between them.

With the exception of exercise equipment there is no furniture in the room apart from a timber bench incorporated into the bay window.

Invisible Studio was established in 2012 by Taylor after he departed former studio Mitchell Taylor Workshop.

The studio has designed numerous timber buildings including an outdoor classroom at the University of Reading. The studio also designed a workshop on stilts, low-cost micro home and composting toilet at its studio near Bath.