Japanese studio Sabaoarch has built a concrete house with tiny windows on a narrow strip of land in Tokyo (+ slideshow).

The Wall of Nishihara occupies a sliver of sloping land between two streets in Shibuya, Tokyo, so Sabaoarch enclosed it in concrete walls, which are punctured with tiny windows to give the residents privacy but still bring in light.

Rooms are arranged on half levels going up the structure, and a folded metal staircase weaves between them, introducing height into the centre of the house. The architects liken the circulation route to climbing a tree. 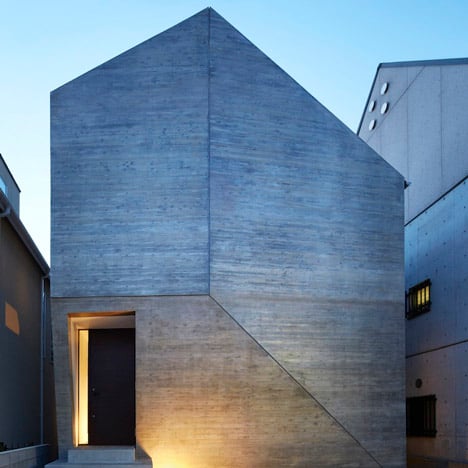 "The multi-levelled house is connected by a rope of stairs. The experience is like climbing up a tree to the sky, looking at the surrounding scenery," said architect Masanori Kuwabara.

The external concrete walls were moulded against slats of timber to give the facade a friendlier, more textured appearance.

Inside, small windows on both sides of the house bring in light, and larger windows offer views outside to balance a sense of enclosure with openness.

"While the exterior feels like a closed space, the house connects its inhabitants with the city," said the architects. "The wall is both substantial in its mass, and has a sense of transparency."

The irregular shape and placement of the windows is also intended to make the building feel more organic, and timber flooring and stair treads help to make the exposed concrete interior feel warmer.

The house has two rooms on half levels on the lower-ground floor, and a living room on the ground floor. The living room opens on to a small garden enclosed by concrete walls, which taper together where the two streets meet outside.

A kitchen-diner occupies the half level above, and the bathroom is at the top of the house. It opens on to a small terrace, which has stairs continuing up to the roof.

Photography is by Shigeru Oono, Yuji Nishijima and Sabaoarch.

Here's some text from the architects:

The Wall of Nishihara, Tokyo

This house on an upper hill in Tokyo stands on a small site with a three-metre width between two roads.

We have created the space for dwelling in the small gap where residents could live in securely.

At first, we have visualised a thin and strong wall as a membrane which contends on the borderline between architecture, person, substance, and phenomenon.

The depth exists in the thinness and material strength exists in bordering weakness. The wall is both substantial in its mass, and has a sense of transparency.

The unevenness of the exterior is made in laps by using a cedar mould, on the concrete wall to create the shade on the rough texture. It seems that the wall with the worn opening is parasitic on the residence, with the surrounding hedge forest around the site.

In order to make the domain in which man can live in the narrow place of a both-sides road, the detail of an opening-wall which wraps the body was able to be considered, maintaining relationship with outside.

As a result, while the exterior feels like a closed space, the house connects its inhabitants with the city.