Knit Sensors was Yen Chen Chang's graduation project from the Design Products course at London's RCA, and involved experimenting with conductive textiles to provide a more tangible alternative to touch screens and other typical interfaces. 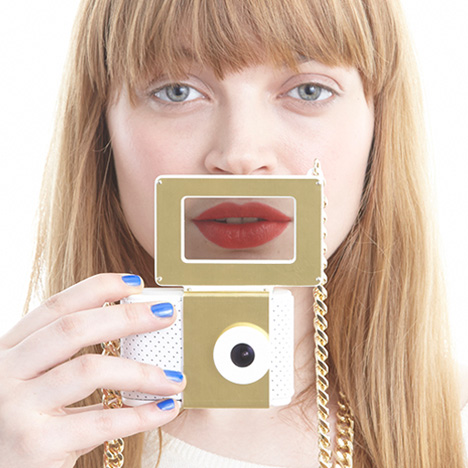 Why not "take a photo through gestures" rather than pushing a button?

"This project aims to encourage people to re-imagine how different electronics could be when integrating different sensing technology," Chang told Dezeen.

"I wouldn't say that it does a better job in sensing signals compared to other computing components, but textile is something that we are so familiar with, and so conventional that it could easily go into our daily life," he said.

The yarn used by Chang comprises 80 per cent polyester and 20 per cent stainless steel, and is commonly used in wearable technology products such as conductive gloves that can operate touch screens.

The designer began his project by exploring the possibility of knitting standard electrical cables into self-supporting structures, which he realised generated a small amount of resistance because of the complexity of their intertwined surfaces.

Recognising that manipulating the surfaces affected the amount of resistance, Chang began to explore the possibility of weaving with conductive yarns connected to sensors that translate actions like stretching and pulling into voltage changes.

Three prototypes were developed to demonstrate the potential for the woven sensors to be applied in everyday scenarios to control household products.

"I looked into our daily life where these motions take place and re-imagined scenarios where these textile sensing interfaces could change the behaviour patterns of how we use electronic objects," said Chang.

Squeezy Juicer is a simplified juicing machine connected to a large knitted ball that powers the juicer when the ball is squeezed.

Tension Lamp features a dangling woven rope with a voltage running through it that is altered by pulling on it. The rope is connected to an Arduino micro-controller that dims the lamp according to the voltage changes.

A carpet made from conductive yarn controls a fan in The Touch of a Breeze, which is intended to evoke the feeling of grass and a light wind. Stroking the carpet harder increases the strength of the breeze.

Chang also applied the technology to a wearable music device based on the simple gestures used in the music rhythm game Guitar Hero, which are similar to those used to play a keyboard and a guitar.

Touching two triggers with the right hand produces notes that can be modulated by folding over the fingers of a glove on the left hand to make contact with sensors on the palms.

The designer said he is interested in using his research to create products for the entertainment or clothing industries: "There are some well-known sportswear companies that produce knitted footwear and it would be exciting to develop wearable technologies with them," he said.